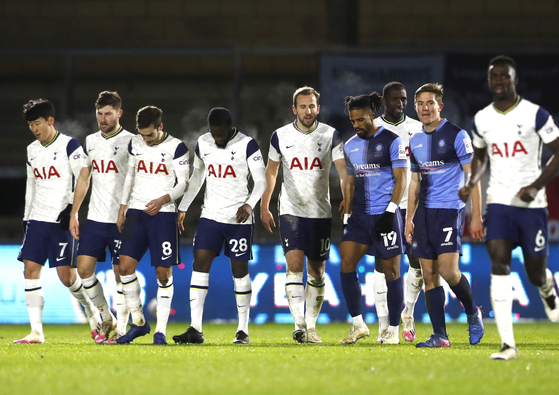 
Son Heung-min picked up another assist as Tottenham Hotspur beat Wycombe Wanderers 4-1 in the fourth round of the FA Cup on Monday.

Spurs started the match with an almost unrecognizable squad on the pitch. Spurs manager Jose Mourinho clearly intended to rest some of his bigger names ahead of the club's Premier League match on Thursday, anticipating an easy game against tier-two Wycombe.

Wycombe clearly had other ideas.

Spurs started slow, conceding the opener to Wycombe's Fred Onyedinma in the 25th minute. It wasn't until injury time that Gareth Bale, enjoying a rare start for his new club, was able to score the equalizer, taking Spurs into the break with the scored tied at 1-1.

Starting the second half, Mourinho appeared to realize that the soft touch wasn't going to work against Wycombe. He brought on Pierre-Emile Hojbjerg and Harry Kane within the first few minutes of the half, adding Son and Tanguy Ndombele in the 68th minute.

With the big guns on the pitch, Spurs still struggled to find the back of the net. Kane had an opportunity in the 70th minute, but was blocked by goalkeeper Ryan Allsop.

Son missed two big chances. The first in the 73rd minute saw the Korean striker dribble his way around the Wycombe defender only to just narrowly miss the goal with his left foot. His second chance, in the 80th minute, was a clear shot on goal that Son sent just over the crossbar.

It was midfielder Harry Winks who finally put Spurs in front in the 86th minute, picking up a deflected shot from Kane to find the back of the net from 18 meters (59 feet).

One minute later, Son pushes a pass through to Ndombele who adds Spurs' third goal with a single touch. Ndombele is back again in the 93rd minute to get the fourth, taking the score to 4-1.

Although Son wasn't able to score, he still played a key part of Spurs' offense, picking up another assist to what is already shaping up to be the greatest season of his career. Spurs proved once again that their offensive lineup can dominate when given room to work, with Son, Kane and Ndombele playing key roles in all three of the team's later goals.

Spurs will be back in action for their Premier League match up with Liverpool on Thursday, or at 5 a.m. on Friday in Korea. This is likely to be a tough match for the London club, having lost their last five games against Liverpool.

Thursday's game also pitches Kane and Son against Liverpool's Mohamed Salah, three of the deadliest strikers in the Premier League. Salah is currently the league's top scorer with 13 goals, followed by Son and Kane tied for second with 12 each.