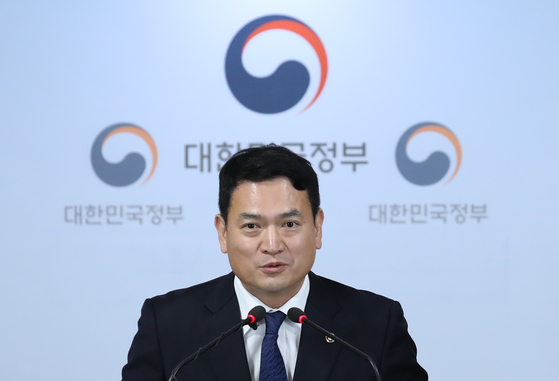 Kim Kyung-wook, a former vice land minister, in a briefing in 2019. Kim is taking office as chief of Incheon International Airport Corporation on Tuesday. [YONHAP]

Kim, 55, is replacing Koo Bon-hwan, who was let go in September for neglecting his supervisory duties during typhoons and making false reports to the Ministry of Land, Infrastructure and Transport.

His removal was also linked to the company’s announcement that it was offering standard employment contracts to subcontracted security guards, argue some critics.

Kim’s focus will be reducing the debt that has mounted at the corporation since the pandemic began and to resolve conflict with the company's labor union, which protested his appointment last week.

In a statement released last week, the union said it expected “a new president with professional knowledge and moral influence, not a government official who lost an election in the 21st general election” held last April.

The union referred to Kim’s appointment as a parachute appointment, which refers to politically connected bigwigs using their clout to get plum retirement jobs at government corporations, state-run agencies and even in some private sector positions.

“Incheon International Airport Corporation is in a crisis,” Kim told local news outlet News1. “The fate of the airport will be determined based on how [I] resolve the difficulties caused by Covid-19, and that will be my utmost priority.”

He added that new competition among international airports will begin once the world recovers from the pandemic. He vowed to turn the risk into an opportunity.

Kim hinted it would take time to resolve the conflict with the union “as a sufficient level of social consensus needs to be formed.”

“[I] will resolve the issue with the union,” Kim said.

His inauguration ceremony starts at 10 a.m. Tuesday at the corporation headquarters.