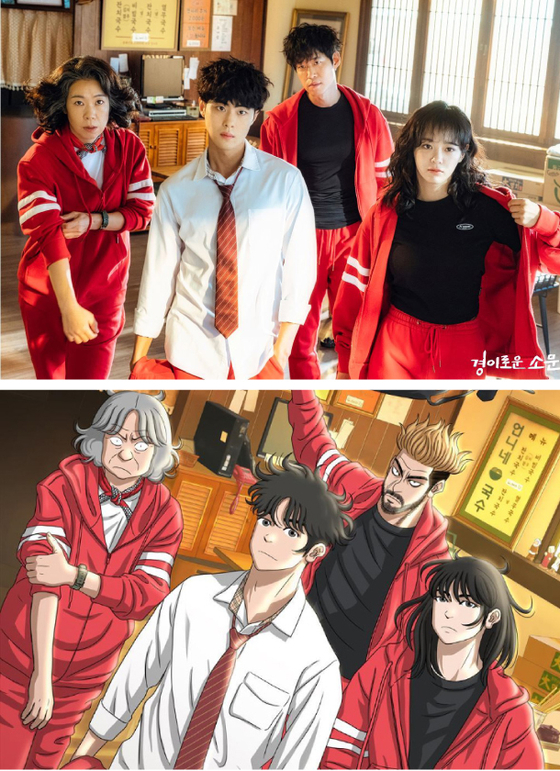 OCN drama series “The Uncanny Counter” was adapted from a Daum webtoon with the same title. The series drew high viewership ratings of 11 percent, according to data from Nielsen KoreanClick. The story revolves around employees of a noodle shop who each have special abilities that they use to hunt demons. . [OCN, DAUM WEBTOON]


Netflix’s “Sweet Home,” OCN’s “The Uncanny Counter” and tvN’s “True Beauty” is just some of the content receiving worldwide recognition for gripping narratives and universes that derive from original webtoons.


"Yumi’s Cells," a webtoon which was published for more than five years and ended with 512 episodes, is the next in line for a remake and fans are anticipating how their favorite two-dimensional characters will come alive through screens.

According to an online research company Research First, which surveyed 1,000 participants aged between 20 to 50 for two days from Jan. 25, the most anticipated series this year is “Yumi’s Cells” with 11.3 percent singling out the series as the television adaption of an original webtoon that they are most looking forward to. In joint second place were Naver webtoons' “The Dexluxe Taxi” and “The Remarried Empress” with 10.8 percent, followed by “Frightening Cohabitation” (8.7%), “All of Us Are Dead” (7.8%) and “D.P” (7.1%).

Below is a wrap-up of some of the most popular webtoon-turned-television series which are scheduled to air this year. 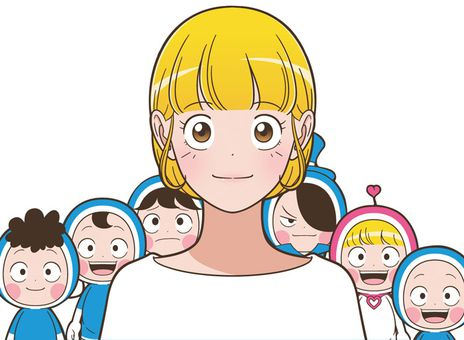 1. Yumi’s Cells
Actor Kim Go-eun was cast for the role of Yumi in the TV adaptation of the Naver webtoon which garnered more than 3.2 billion views on the platform, written and drawn by cartoonist Lee Dong-geun.

The story itself revolves around Kim Yumi, an office worker in her 30s, whose body is controlled by some 200 cells who are busy controlling her flow of thoughts and ultimately her behavior. Although she’s clumsy about expressing her own feelings she makes the little things matter in her life through her relationships and work, and the variety of emotions and worries that spring from her efforts can be related to anyone who wants to love and feel a sense of achievement in their life.

To accurately portray the tiny cells in Yumi, the television series will be a fusion of animation and live-action.

The filming is to begin in the first half of this year. 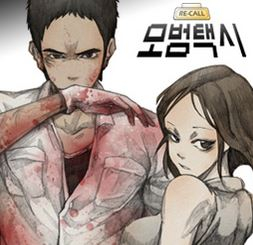 The original webtoon available on Naver provided catharsis to readers. It's centered on taxi driver Kim Do-ki who takes so-called “revenge calls” from his clients and acts as a paid hit man on their behalf. The clients are mostly victims who want to take revenge on their perpetrators because they feel society and the legal system has failed to properly punish them for their crimes. The R-rated story did not hesitate to depict violent and explicit scenes and received positive reviews for drawing out neglected social malaises.

In the drama series, the story will center around Do-ki the taxi driver, the perpetrators and the governmental authorities in pursuit of the criminals.

The series is scheduled to air on SBS from April. 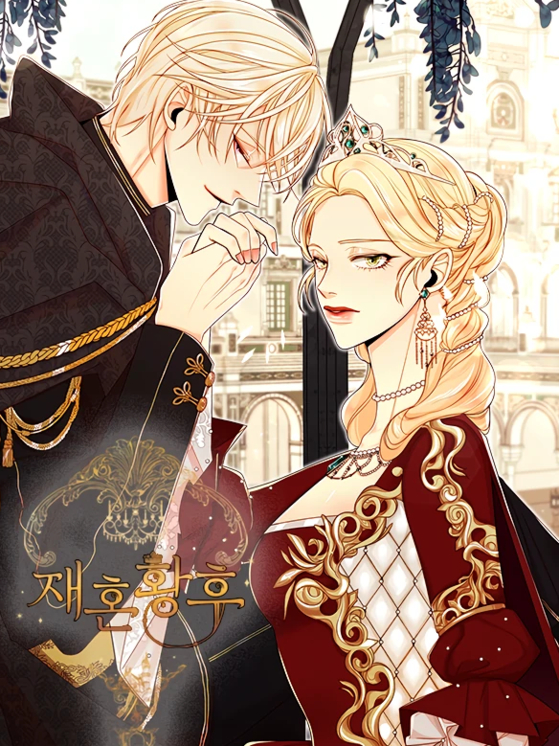 3. The Remarried Empress
"The Remarried Empress" was originally a fantasy romance web novel based on an emperor who’s fallen in love with a slave and demands a divorce from the empress, who in turn announces that she will marry another emperor from a neighboring country.

The novel was published on Naver from November 2018 and stormed the ranks of the romantic fantasy genre of Naver’s web novel content, sitting at No. 1 for 58 consecutive weeks. Due to its immense popularity the story was adapted to the webtoon format and will also be turned into a television series by production company Studio N, although there’s no news about the casting yet.

Naver has been promoting actor Soo Ae for their web novel and webtoon content, and hardcore fans have been enjoying themselves coming up with combinations of actors most suitable for the roles online. 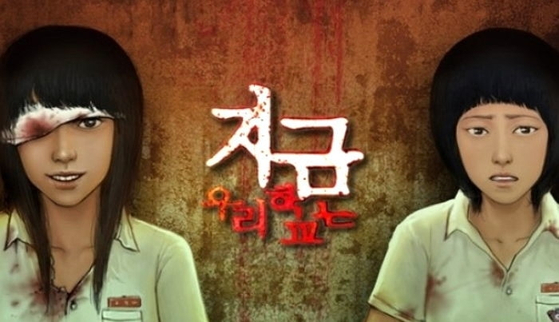 4. All of Us Are Dead
Following the global craze for K-zombies after Netflix’s “Kingdom” (2019-2020) and films “Train to Busan” and “Peninsula,” Netflix will adapt the Naver webtoon “Now At Our School” into a series titled “All of Us Are Dead.”

The story takes place at a high school where a group of students find themselves trapped in a building while a zombie apocalypse sweeps across the world.

5. D.P
Lezhin Entertainment’s highly popular webtoon “D.P: Dog Days” was picked up by Netflix to be turned into an original series titled “D.P”

The original webtoon accumulated many views for describing the inhumane treatment and violation of human rights that occurs within the military. D.P, which stands for Deserter Pursuit, is a team of soldiers dispatched by an army to hunt down soldiers who have abandoned their duty.

In the Netflix series, the story is to center around soldier Joon-ho who is recruited to the D.P team and his struggles witnessing brutalities within the military.

Director Han Joon-hee of films “Coinlocker Girl” (2015) and “Hit-and-Run Squad” (2019) took the helm of the series and co-wrote the script with cartoonist Kim Bo-tong, the original creator of the webtoon. 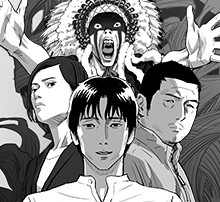 6. Hellbound
Creator of “Train to Busan” and Cannes-invited “Peninsula,” director Yeon Sang-ho wrote the story for the Naver webtoon “The Hell” while cartoonist Choi Gyu-seok, the author of another popular Naver webtoon “Gimlet,” drew the webtoon.

Yeon will work with Netflix to adapt his webtoon into an original series titled “Hellbound,” with actors Yoo Ah-in, Park Jung-min, Kim Do-yoon and Lee Re finalized to portray lead roles.

In this universe, a supernatural phenomenon begins to occur in Korean. Grim Reapers suddenly start to arrive in the city, forewarning people of the exact date and time they will be taken to hell. People fall into chaos and a new cult rises. 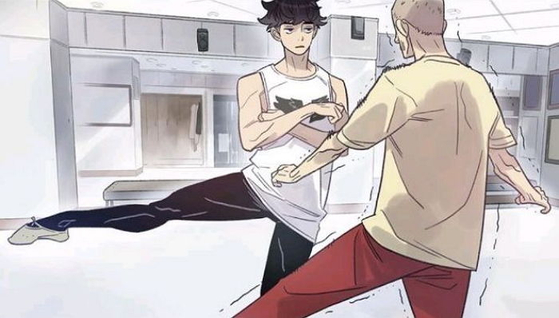 7. Navillera
"Navillera" is a heartwarming story published on Daum webtoon about a 70-year-old man finding the courage to follow his lifelong dream of learning ballet and a 23-year-old ballet dancer dealing with his own struggles.

Deok-chul, a retired mailman, has a secret ambition to learn ballet but faces opposition from his family, as well as stares from his neighbors and friends. Nevertheless, he is eager to learn, and meets Chae-rok at a private dance institute. Chae-rok is a talented dancer struggling with obstacles of his own. The duo, although at almost opposite ends of their lives, find out that they have a lot to learn from each other.

The series is scheduled to be broadcasted on tvN in the first half of this year. 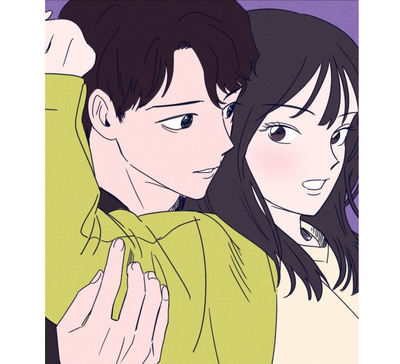 8. I Know But
"I Know But" is a Naver webtoon in which young viewers sympathized greatly with the protagonist’s college romance.

After getting over her first break-up Yoo Na-bi meets a quiet, irresistibly attractive boy named Park Jae-eon, to whom she’s instantly drawn to. The story, although focusing on their romance, also touches on other relationships Na-bi deals with.

Actors Han So-hee and Song Kang have reportedly been offered the roles of Na-bi and Jae-eon, but news of the final cast has not been revealed.

The series is expected to be aired on JTBC this year. 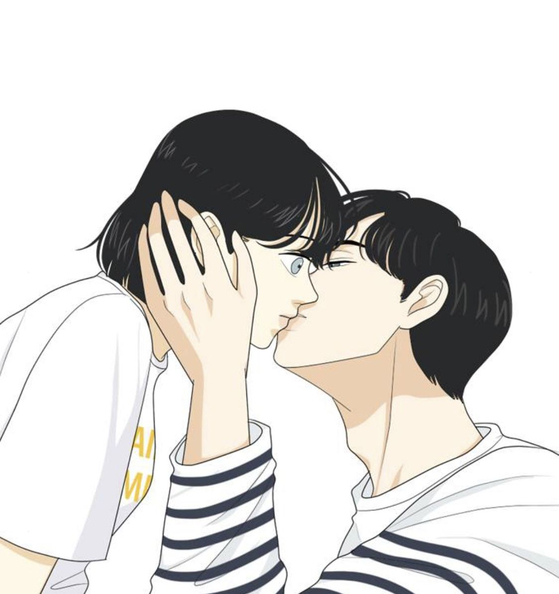 9. Frightening Cohabitation
The webtoon "Frightening Cohabitation" is a rom-com based on a 999-year-old gumiho and a college student. Gumiho is a nine-tailed fox, which local folk legends describe as possessing impeccable beauty when in human form but is in fact a demon that seduces people to take over their lives.

Shin Woo-yeo, the gumiho, is on the brink of turning into a real human when he meets Lee Dam. Due to series of incidents the two form a contract to live together, and Woo-yeo slowly realizes that Lee Dam may be exactly what he needs to achieve his goal.

The series is scheduled to air on tvN in the first half of this year and will be available overseas via global streaming platform iQIYI. 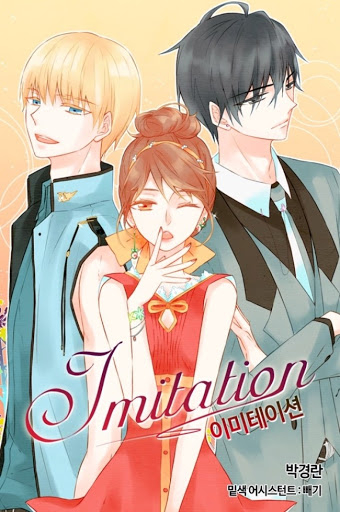 10. Imitation
'Imitation,' a mega-popular webtoon published on KakaoPage that garnered over 430 million views, describes the lives of struggling K-pop idols trying to make it to the top of the entertainment industry, and romance that springs up between them.

Some actual K-pop idols have been cast as characters, such as ATEEZ members Yunho, Jongho, Seonghwa and San, SF9 members Chani and Hwiyoung, Lee Jun-young of boy band U-Kiss and Jiyeon of former girl group T-ara.

Production staff of MBC drama series “Rookie Historian Goo Hae-Ryung” (2019) — producer Han Hyun-hee and screenwriters Choi Sun-young and Kim Min-jung are to collaborate together again for this series, which is scheduled to air on KBS in the first half of this year.

webtoon television adoption 2021 Yumi's Cells The Deluxe Taxi The Remarried Empress All of Us Are Dead D.P Hellbound Navillera I Know But Frightening Cohabitation Imitation

[WHY] Is Netflix the only reason Korean originals are gaining attention?