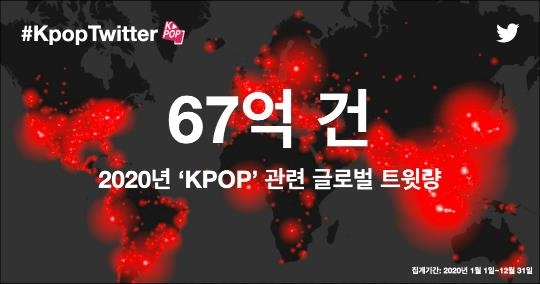 
According to data from social media platform Twitter released Thursday, there were a record-breaking 6.7 billion tweets related to K-pop last year, an upsurge of 600 million tweets compared to 2019.

“Even in a year where the sounds of K-pop were not able to fill the arenas and venues that they typically do, the #KpopTwitter community set a new worldwide record and K-pop artists continue to energize their global fanbase on Twitter,” said Kim Yeon-jeong, the head of global K-pop partnerships at Twitter.

The country with the most K-pop related tweets was Indonesia, followed by Thailand, Korea, the Philippines, the United States, Brazil, Malaysia and Japan. 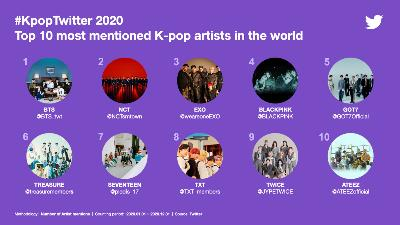 
The country with the most users who uploaded K-pop-related tweets was Japan, followed by the United States, Indonesia, Korea, the Philippines and Brazil. K-pop artists most mentioned on the platform were BTS, NCT 127, EXO, Blackpink and GOT7.

The song tweeted about most last year was BTS’s “Dynamite,” while six of their other tracks dominated the top 10.

The No. 1 artist for the category of “Rising K-pop Artist," based on the tweet volume for those who debuted after 2017, was YG Entertainment’s boy band Treasure.