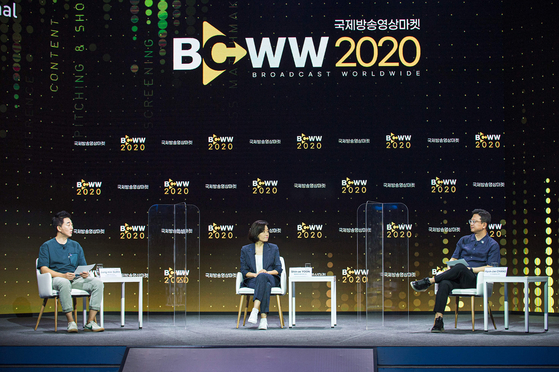 
The ever-growing popularity of Korean drama series and reality shows can now be seen in numerical data, as such shows continuously top the most viewed rankings on global streaming services such as Netflix.

Now, more than ever, local production companies, broadcasters and Over-The-Top (OTT) platforms are shifting their attention toward the global market to create content that can charm not only locals but also foreign viewers.

“Since about three to four years ago as local variety shows such as SBS’s 'Running Man' and MBC’s 'Masked Singer' resonated with the global audience, we started to feel the potential that Korean shows had,” Yoon Shin-ae, CEO of the film production company Studio 329, said at an online session of “Expansion of Korean content in the age of new platforms,” held by the Broadcast Worldwide 2020 (BCWW 2020) on Wednesday.

Hosted by the Korea Creative Content Agency (Kocca) and sponsored by the Ministry of Culture, Sports and Tourism, BCWW 2020 is being held online from Sept. 7 to 11 under the theme of “Content, Designing the New Normal.” BCWW is an online broadcast content market in which global broadcasters gather around the world to introduce, share and discuss the future of the content industry.

As a production company who’s had the chance to work with top platforms, Yoon said that each platform targets its audience differently when creating its own original series.

“YouTube initially was interested in K-pop, while Netflix looks for content that is unique and has a strong, exceptional tone of its own,” Yoon analyzed. “But when we are looking for new intellectual property (IP) to turn into a series, we don’t start with an aim to fit into criteria of a certain global OTT platform or a certain country. What our company puts first on our list is that we are able to maintain the tone and the message that attracted us to the story all throughout our episodes.”

Chang, who’s had over two decades of experience in creating reality shows, views that quickly catching onto globally resonating trends and localization are the most important factors for variety shows to succeed overseas.

“For instance, for ‘Busted!’ I knew that the global trend nowadays was genres [such as mystery, horror and drama] and decided to fuse detective work into variety shows,” Chang said. “For ‘Together,’ and especially because it was a travel variety show, we targeted global Netflix subscribers from the start. In order for reality shows to resonate with the global viewers, it’s important to really ‘know’ the countries that you’re targeting — all of the shows’ storylines should be based on the country — in other words, the creators should be aware of the circumstances within the countries.”