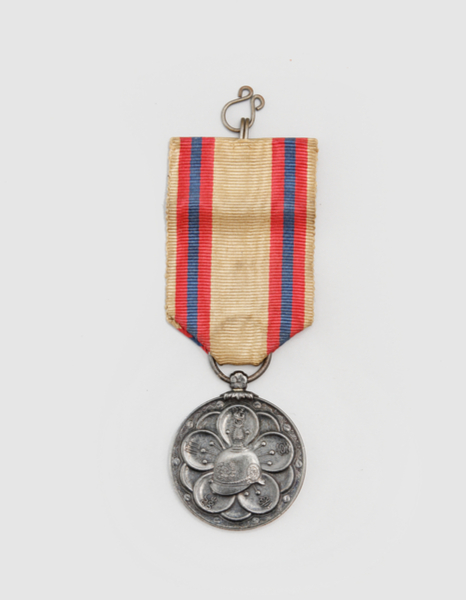 Emperor Sunjong's medal that was produced in 1907 to commemorate his ascension to the throne. [NATIONAL PALACE MUSEUM OF KOREA]


A special exhibition “Military Rituals — Symbol of Joseon Dynasty’s Military Power” is currently underway at the National Palace Museum of Korea. While colorful flags that were used during military rituals or the authoritative military uniforms may have all the spotlight, curator Kim Jae-eun says she wanted to shed light on one small artifact that measures only three-centimeters in diameter: a commemorative medal.

Her passion moved the heart of the director of the museum, giving her the green light to hold a small exhibition in conjunction with the “Military Rituals” exhibit, titled “Commemorative Medal for Emperor Sunjong’s Enthronement,” which can also be viewed online from Feb. 2.

The medal on display was produced in 1907 to commemorate Emperor Sunjong’s ascension to the throne. During the Korean Empire (1897-1910), medals were produced to mark special state events and were distributed to the organizers and guests.

When civil and military officials of the Korean Empire wore their official uniforms, they attached commemorative medals and insignia onto the uniform.

Commemorative medals usually feature a design symbolizing the event on the front side and an inscription with a legend and date on the reverse.

On the front side is a relief design of two overlapping flowers and a helmet. The flower is called an oyat, which was a symbol of the imperial court and the Korean empire. It visualizes a type of plum blossom native to Korea. In the center is a western-style helmet that was worn by the emperor. Regardless of time and place, the headgear worn by a king or emperor demonstrates royal or imperial authority.

“No actual examples of the helmet have survived today, so the commemorative medal is a valuable artifact that offers a glimpse into the period in which the Western-style commander-in-chief uniform was decided, following the establishment of the Wonsubu (Supreme Military Council) and the emperor’s assumption of the role as commander-in-chief in 1899,” said Kim.

The exhibit can also be enjoyed virtually through high-quality videos shared on the museum's website (gogung.go.kr) and its YouTube channel and the Cultural Heritage Administration of Korea.