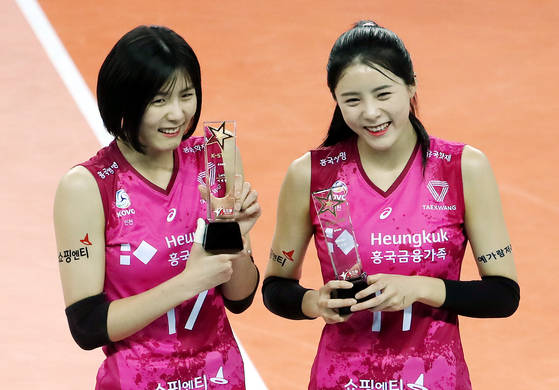 The twins, now aged 24, were accused of bullying by an anonymous internet user claiming to be a former middle school teammate. Their post, titled "I am a school violence victim of current volleyball players," started trending in Korea on Wednesday.

The post listed 21 allegations of bullying, including being threatened with a knife, stealing money and physical harm. The user added that there are four or more victims who were bullied by the twins.

Without mentioning names, the user attached a photo of the yearbook of the middle school that she attended with the players and group photos of the volleyball club in elementary and middle school. Based on the years and the names of the schools, volleyball fans identified the twins as the offenders.

Later in the afternoon, the user added that the bullies had contacted her and asked if they could meet in person to make an apology.

Shortly after, Lee Jae-young and Lee Da-young made a public apology via Instagram.

“I hurt many people because of my irresponsible behavior in the past when I was immature," Lee Jae-young said in a handwritten message. "I sincerely apologize for those who spent their time in pain due to my misbehavior in school."

Lee Da-young also apologized: "I deeply apologize to my colleagues who I worked with during my school days for the bad memories. If the victims allow me, I will visit them in person and apologize."

Accusations of school bullying years after the incidents have been fairly common in Korea in recent years, with a number of celebrities forced to apologize after being publicly called out for bullying former classmates.