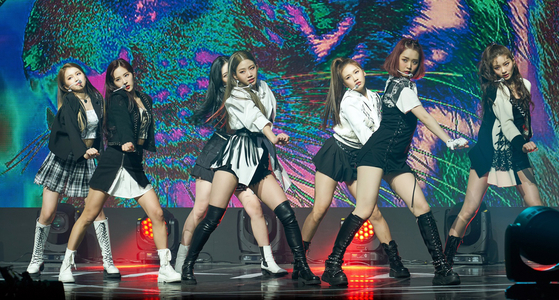 TRI.BE is a seven-member group consisting of four Korean, one Japanese, and two Taiwanese members. “TRI.BE” is a portmanteau of “triangle,” which they consider to be the perfect shape, and “being”. “It means that we are perfect beings, here to dominate the K-pop scene,” said Jinha, one of the Korean members of the group.

He also produced girl group EXID and wrote its smash hit “Up & Down” (2014). EXID member LE participated in the production as well and provided backing vocals for “Doom Doom Ta.”

TRI.BE’s debut song “Doom Doom Ta” is an up-beat dance number about "living independently without caring about what other people think,” according to the group’s leader Songsun. The song is performed with powerful choreography, which members demonstrated on stage and dubbed the “wiper dance” due to its windscreen wiper-like motion.

“Doom Doom Ta” is the lead track of TRI.BE’s debut EP “TRI.BEDaLoca,” which dropped on Wednesday at 6 p.m. shortly after the showcase.

“I was a trainee for nine years before debuting,” said Songsun, who is also a cousin of Girls’ Generation member Yuri, during the showcase. “I want to be a perfectionist like my cousin too.”

Taiwanese members Kelly and Jia introduced themselves in Korean, Mandarin, and English, while Japanese member Mire introduced herself in Korean and Japanese. TRI.BE’s non-Korean members said learning the language was the hardest part of training in Korea, but were able to overcome the challenge with the help of the Korean members.

“Our goal is to win the Rookie of the Year award and come first place in music shows,’ said member Soeun while talking about TRI.BE’s future dreams. “I also really want us to appear on entertainment shows,” she added. Members also named K-pop powerhouse Blackpink as their role model.