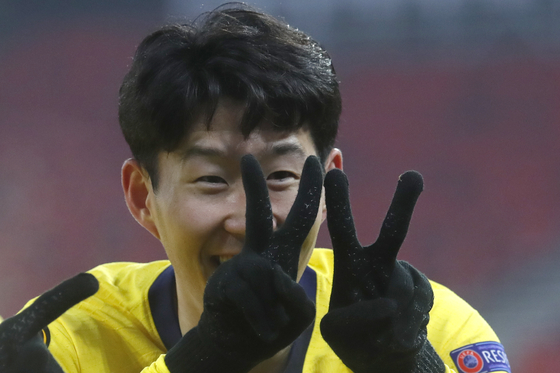 Tottenham Hotspur's Son Heung-min celebrates after scoring his side's first goal during the Europa League round of 32, first leg, match against Wolfsberger AC at the Puskas Arena stadium in Budapest, Hungary, on Thursday. [AP/YONHAP]


Tottenham Hotspur's Son Heung-min scored his 18th goal of 2020-2021 across all competitions in the first leg of the Europa League round of 32, while also setting a new personal record of 31 goals and assists in a season.

With Harry Kane absent, Son stood at the forefront of the 4-2-3-1 formation in the match against Wolfsberger in the UEFA Europa League in Budapest on Thursday, which finished 4-1 to Spurs.

Son opened the scoring for Spurs in the 13th minute with a header from Gareth Bale's cross from the right side.

The goal meant he broke his previous career high of 30 goals and assists.

With Tottenham leading 3-0 at the break, Son was replaced by Carlos Vinicius in the second half.

With the win, Spurs are one step closer to advancing to the round of 16 in the Europa League. They will take on Wolfsburg again at home next Wednesday, or in the early hours of Thursday morning in Korea.