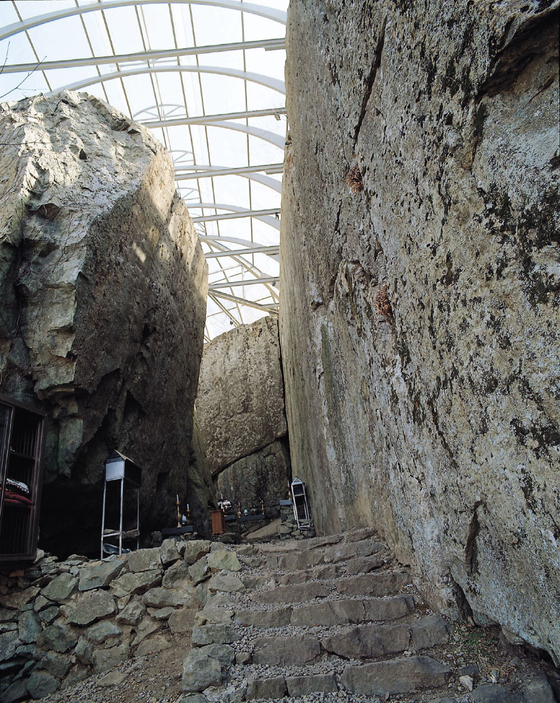 Originally, it was made as a stone for Buddhist punishment.

Ten Bodhisattva and Buddha images are carved on the walls of the stone cavern.

In addition to these, there is a carving of a standing Bodhisattva that measures 8.2 meters high (27 feet), on another rock to the northeast.

Its round face wears a benign smile with a twofold small protrusion above its head.

The robe, gently covering both of the shoulders has U-shaped folds.

A 6-meter high Bodhisattva image is carved on the eastern surface of the rock.

Its left hand is rested on the chest, with the right hand holding a treasure bottle in front of the body.

Although it was not clear whether a Bodhisattva was carved on the northern surface of the rock, because it was seriously worn away, this Bodhisattva in a combination with two other Bodhisattvas presented a triad.

On the east side of this Bodhisattva, 400 women wrote a passage which reads 'We carved a Maitreya Bodhisattva and two wise men in Sinseon Mountain.' On the northern surface of the rock, 7 Buddha statues, Bodhisattva and a portrait were delicately carved.

Except for the Bodhisattva with a pensive look, they’re posted a unique posture with their left hands pointing to the east as if they’re trying to guide you to the principle Bodhisattva.

At the bottom, two worshippers of Buddha are carved — one is a monk and one is wearing a hat shaped like a Korean sock.

They offer important information to learn the style of Silla people.