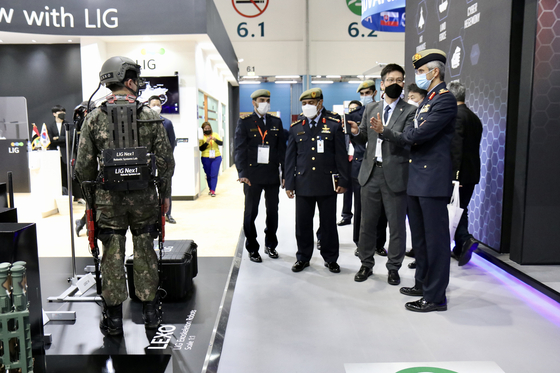 Wearable robot LEXO by domestic defense manufacturer LIG-Nex1 is on display at the International Defence Exhibition and Conference (IDEX) in Abu Dhabi. [LIG-NEX1]


Korea's leading defense armaments manufacturer LIG-Nex1 revealed its new powered exoskeleton LEXO as part of the company's exhibit of military hardware for export in the United Arab Emirates at this year's International Defense Exhibition and Conference (IDEX) from Feb. 21 through Feb. 25.

This is the company's sixth time participating in the biennial exhibition.

Commenting on the company’s showing at this year’s IDEX, company representative Ahn Jin-taek said, “The hardware on display this year showcases the company’s focus on fulfilling the 'game-changer' framework of the South Korean military’s future goals and its advances in futuristic combat technology.”

The South Korean military’s “game-changer” objectives include building a large arsenal of all-weather ballistic and cruise missiles, building drones and other autonomous equipment and upgrading the “warrior platform” of equipment and capabilities for its individual soldiers.

The newly revealed LEXO, part of the warrior platform, is a wearable robot that enhances the physical performance, muscle strength and weight load capacity of soldiers.

The company’s unmanned surface vehicle Sea Sword also made its overseas debut at this year’s IDEX. The artificial intelligence-powered craft is capable of mapping and collecting data for coastal defense without a human crew, reflecting the company’s focus on developing equipment which can penetrate environments inhospitable to or difficult for human expeditions.

LIG-Nex1 established the Middle East as an important business market in 2009. The biennial event has provided opportunities for the company to promote its products and technology to foreign buyers.