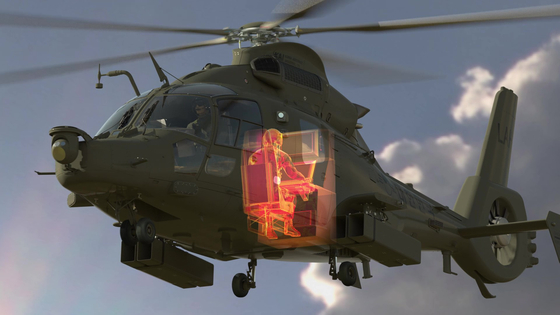 A graphic illustration of a manned-unmanned teaming system aboard a light armed helicopter. [KAI]

The two companies will work on mounting unmanned aerial vehicles (UAV) aboard KAI’s domestically developed light armed helicopters (LAH). The collaboration could give Korea's military forces unmanned loitering munitions systems, in which a helicopter would hover at distance while an onboard UAV searches for targets and attacks once a specific target is located.

The announcement came a few days after South Korea’s Defense Acquisition Program Administration (DAPA) said that KAI is aiming to provide its Light Armed Helicopter (LAH) with a MUM-T capability. KAI’s LAH is due to complete development in 2022.

“The manned-unmanned system will allow pilots to approach and launch unmanned, weaponized aerial vehicles that will fire on or bomb enemy targets without posing a risk to the pilots themselves,” said KAI publicity representative Han Jeong-eun in a phone interview with the Korea JoongAng Daily on Thursday.

According to a press release from KAI, the collaboration is expected to expand the LAH’s current operational and combat capacity. The two companies aim to start joint tests later this year.

The Army has also eyed the possibility of using manned-unmanned teaming systems for future air defense. Mounting KAI’s LAH with UAVs would represent an advance from the LAH’s current capability to receive data from a UAV via a ground control station.

IAI’s President and CEO Boaz Levy said, “The MOU signed today is another milestone in our growing collaboration with KAI. IAI has long relations with the ROK and the local industries and we are happy to join KAI, one of Korea’s leading companies, to explore future opportunities.

“Combining IAI’s proven capabilities in loitering munitions and KAI’s technologies and products will create an opportunity for an improved solution to the future battlefield.”

KAI’s president and CEO, Ahn Hyun-ho, spoke of the importance of the decades-long partnership between IAI and KAI.

“Through the combination of domestic aircraft technology and IAI’s excellent unmanned aerial system technology, IAI and KAI will provide a foothold for innovation, such as strengthening the defense power of the Republic of Korea and commercializing exports in the future,” Ahn said.

Driven by security concerns of a similar nature – the threat of aerial bombardment by hostile neighbors – South Korea and Israel in recent year have ramped up their defense collaboration.

To bolster its air defenses, South Korea also procured Block C radar from Israel in 2012. The radar systems are expected to become operational in the early 2020s.