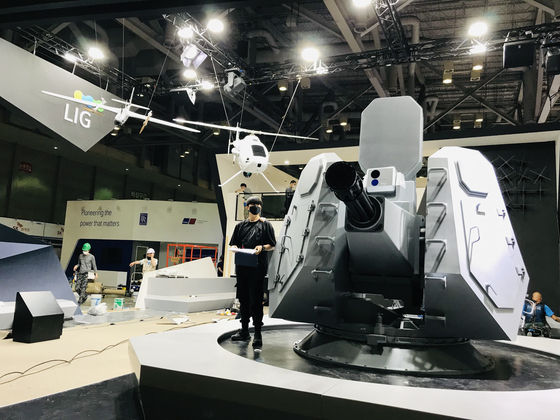 A model of LIG-Nex1's second-generation Close-In Weapon system (CIWS-II) on Tuesday, just before the opening of the International Maritime Defense Industry Exhibition (Madex) in Busan. [LIG-NEX1]


LIG-Nex1 will showcase a model of its second-generation Close-In Weapon System (CIWS-II) at the International Maritime Defense Industry Exhibition (Madex), which will be held from Wednesday to Saturday in Busan.

CIWS-II is a crucial point-defense weapon system for detecting and destroying short-range incoming missiles and enemy aircraft that penetrate the outer defenses. It is typically mounted shipboard in a naval capacity. Nearly all classes of larger modern warships are equipped with some kind of CIWS device.

LIG-Nex1 said that the system would enter development once the Defense Acquisition Program Administration (DAPA) awards a contract in August or September.

LIG-Nex1’s CIWS-II uses the same barrel specifications and ammunition loading system as the Goalkeeper weapons system currently employed by the Korean Navy, which was developed by the Dutch company Thales.

If LIG-Nex1 is successful in winning the tender, its CIWS-II will be mounted on the latest Navy warships, including the KDDX-class destroyer, which is currently under development by Hyundai Heavy Industries and due to be launched after 2025, and the FFX Batch-III or Ulsan-class frigates, which are also being developed by Hyundai.

In its press release, LIG-Nex1 expressed confidence in its ability to develop CIWS-II for the Navy, citing its track record of developing key technologies necessary for the CIWS-II, including an active electronically scanned array radar.

“We are confident of successful development because we already possess the technology for Haegung [sea bow] guided missiles, which is very similar,” the company’s press release said.

“We will assume the mantle of maintaining the Navy’s fighting capabilities.”