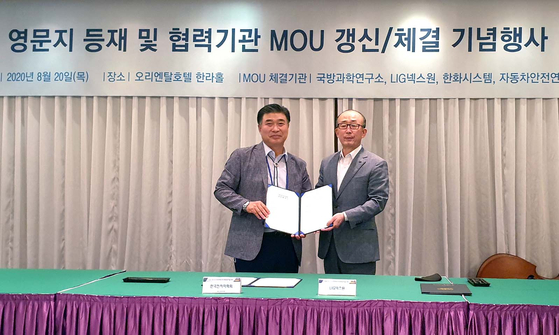 
Weapons manufacturer LIG Nex1 signed a memorandum of understanding with the Korean Institute of Electromagnetic Engineering and Science (KIEES) Friday, in a bid to develop the next generation of defense systems using electromagnetic wave technology.

LIG Nex1 hopes to combine its decades of experience in areas such as guided weapons, surveillance and telecommunications technology with the academic strengths of KIEES.

The two will strengthen academic ties through joint research and academic events. They will also exchange data and technologies related to the field.

"LIG Nex1 has been trying to localize research and development of defense weapons systems. We hope this partnership will strengthen our capability in electromagnetic wave technologies, which is becoming more important lately,” said Kim Ji-chan, President and CEO of LIG Nex1.

“We hope to ultimately contribute to the global expansion of 'K-Defense’ by securing patents of such technologies and increasing exports.”

Established in 1989, the KIEES is a major research hub and a core policy advisor in the field of electromagnetic technology. It has been partnering with other international research centers in the United States, Japan and China.