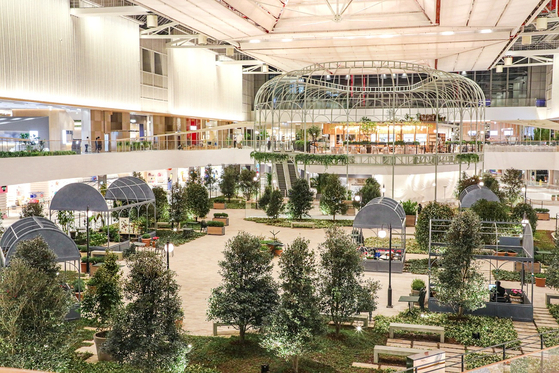 
Basking in the sunlight surrounded by trees and serenaded by chirping birds is an experience almost unique to the great outdoors. But Hyundai Department Store has brought much of this to its new branch, The Hyundai Seoul, Korea’s largest department store, in Yeouido, western Seoul.

Unlike most department stores, which primarily focus on shopping, The Hyundai Seoul has rethought space and its use in order to make the customer shopping experience feel like “healing therapy.”

“As the Covid-19 prolongs, people are feeling tired and frustrated,” said Yoo Yong-mu, a spokesperson for Hyundai Department Store Group, at the pre-opening event of the new branch on Thursday. “The Hyundai Seoul provides a Sounds Forest [resting area] that spans 3,300 square meters (35,521 square feet), where customers can relax and enjoy shopping as if they’re receiving therapy.”

Yoo added that the company has given up 200-billion-won ($182 million) worth of annual earnings that could have been generated from The Hyundai Seoul by reducing the number of stores at the department store in return for expanding the relaxing areas.

Of the total 89,100 square meters, stores account for 51 percent of the space. The total space occupied by stores is around 14 percentage points lower than the average 65 percent at Hyundai Department Store’s 15 other branches.

Dome windows on the ceiling, a 12-meter (39 feet) waterfall, natural grasses and artificial trees across different floors are part of The Hyundai Seoul’s efforts to make the space more customer-friendly. 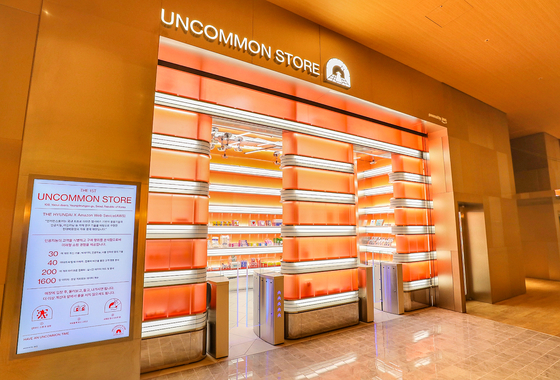 The unmanned Uncommon Store, made in collaboration with Amazon Web Services, inside The Hyundai Seoul. [HYUNDAI DEPARTMENT STORE GROUP]


From the seventh basement floor to the eighth floor above ground, there are a total of around 600 stores at The Hyundai Seoul.

Some of the well-received brands include the first Arket store of the H&M group in Asia, the Uncommon Store and Bungaejangter Lab, as well as popular coffee houses like Tailor Coffee and Blue Bottle Coffee.

The Uncommon Store is an unmanned store made in collaboration between Hyundai IT&E and Amazon Web Service. Due to its small size, only a limited number of people can enter the space at once. Around 200 types of goods, including snacks, are sold at the 33-square-meter store, where customer behavior is detected by sensors on the ceiling. Payment is made via mobile app.

Bungaejangter is the operator of a mobile second-hand marketplace intended to facilitate peer-to-peer trading of products. At the offline Bungaejangter Lab, limited second-hand sneakers are traded.

The department store is targeting nearby high-income banking and finance office workers, as well as foreigners.

“We deliberately added the word Seoul with the goal to attract foreigners,” said Yoo. 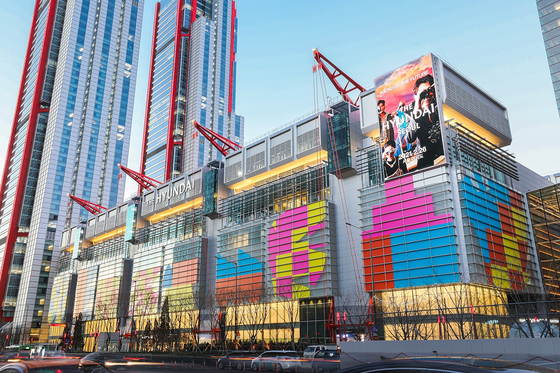 Exterior of The Hyundai Seoul, which is connected to Yeouido subway station. [HYUNDAI DEPARTMENT STORE GROUP]


The Hyundai Seoul does not have three major brands - Chanel, Louis Vuitton and Hermes – which are often seen as a barometer that determines the value of a department store.

The Hyundai Seoul faces numerous competitors nearby, including Lotte Department Store in central Seoul and Shinsegae Department Store in Yeoungdeungpo, western Seoul. Another hurdle is whether it will be able to attract enough visitors over the weekend when population in the area is low.