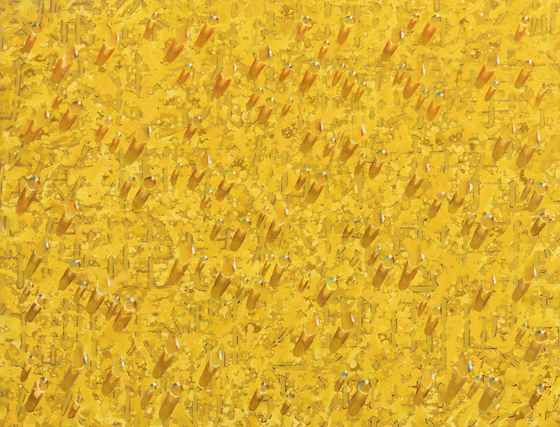 ″Recurrence″(2016) by Kim Tschang-yeul will be presented by Gallery Hyundai in the upcoming Galleries Art Fair, which will take place from Thursday to Sunday at COEX in southern Seoul. [GALLERIES ASSOCIATION OF KOREA]


With the local art market showing signs of a rebound, the Galleries Art Fair, which is this year’s first art fair, is attracting attention. The 2021 edition of the fair will take place from Thursday to Sunday at Hall C of the COEX convention center in southern Seoul, according to its organizer, the Galleries Association of Korea, on Friday.

A total of 107 galleries will participate in the oldest art fair of Korea, slightly down from 110 galleries last year. They include most of the country's major galleries including Kukje, Hyundai, Gana Art, Hakgojae and PKM. Unlike the KIAF, the international art fair also organized by the association and set to be held this autumn, the Galleries Art Fair features only local galleries.

The art market has “entered a booming cycle,” the Korea Art Authentication & Appraisal Center said in a report on Wednesday. “We now see similar phenomena to those seen in the early stage of the 2005-2007 booming cycle of the Korean art market.”

As one of the signs, the center pointed out the sale of Seoul Auction, the nation’s biggest auction house, last Tuesday. The hammer fell for 90 percent of the lots, with a painting of water drops by the renowned artist Kim Tschang-yeul (1929-2021) who passed away in January, fetching 1.04 billion won ($924,600), a record-high price for the artist.

Gallery Hyundai, BHAK and some other galleries will also offer Kim’s water drop paintings in the upcoming Galleries Art Fair. Market insiders are curious whether the fair will confirm that the local art market is entering a booming cycle.

Meanwhile, Hwang Dal-seung, founder of Keumsan Gallery and the new head of the Galleries Association of Korea, unveiled some ambitious plans to extend the foreign market for Korean artists as well as the local market, in a press meeting on Friday.

“We are now in talks with the organizers of the Frieze Art Fair, one of the world’s leading art fairs, to invite the fair to Seoul, so that it could be held simultaneously with the KIAF,” he said. Frieze, based in London, now takes place also in New York and Los Angeles. “And we plan to hold the KIAF also in Singapore when the ART SG fair is held,” he added.