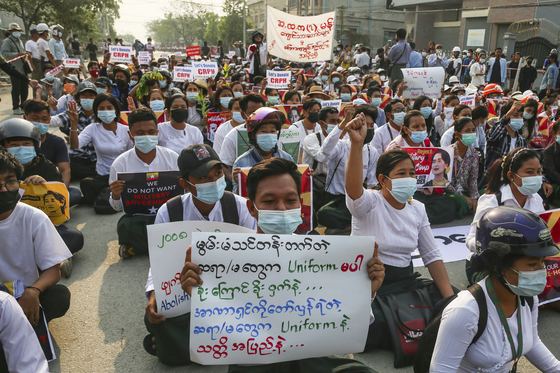 Demonstrators sit with placards during a protest against the military coup in Mandalay, Myanmar on Thursday. The Committee Representing the Pyidaungsu Hluttaw, a Myanmar government in exile representing Aung San Suu Kyi's National League for Democracy (NLD), announced that it plans to form a new coalition government with other democratic forces in the country. [EPA/YONHAP]


Korea’s mayors and governors expressed support for people in Myanmar fighting for democracy and against a military coup.

The Governors Association of Korea (GAOK), an association of the heads of 17 metropolitan and provincial governments, issued a statement Thursday condemning a recent military coup.

"We strongly urge Myanmar's military to immediately accept the demands of the people and the international community for democracy," the association said in the statement.

The association urged Myanmar's military to stop a bloody crackdown on protestors and human rights abuses.

"The people will rise again and win in the end,” said Song Ha-jin, Governor of North Jeolla and President of GAOK, “The history of Korea, such as the April 19 Revolution and the May 18 Gwangju Democratization Movement in which we obtained democracy through the sacrifice of citizens, proves it proudly.

"We sincerely hope that a democratic spring will come to Myanmar,” he added. 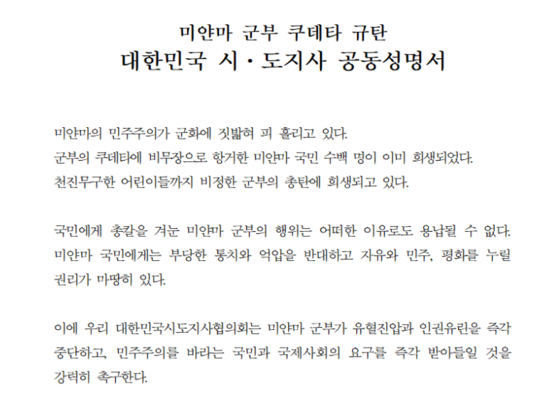 The Governors Association of Korea (GAOK), an association of the heads of 17 metropolitan and provincial governments, issued a statement Thursday condemning a recent military coup. [SCREEN CAPTURE]


Myanmar's military declared a state of emergency on February 1, and detained key officials of the elected government, including Aung San Suu Kyi. As of March 30, more than 500 protestors were reportedly killed and 2,500 or more were detained.