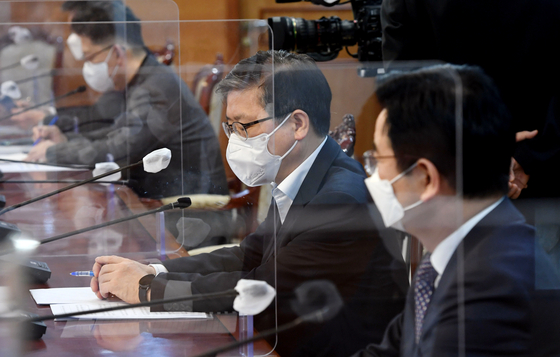 Land Minister Byeon Chang-heum on Sunday attends a meeting with Prime Minister Chung Sye-kyun regarding corrective measures to be taken at LH. [NEWS1]


Another Korea Land and Housing Corp. (LH) employee has been found dead amid an expanding inquiry into allegations that employees at the state-run corporation purchased land using inside information.

The death of the 58-year-old employee on Saturday in Paju, Gyeonggi is the second in recent days, following the death of a 56-year-old executive in an apartment complex in Bundang, Gyeonggi on Friday.

Neither employee were among those listed as suspected of buying land using inside information regarding LH’s development plans after preliminary results of a government inquiry were announced Thursday.

However, police said they received a tip-off regarding the 58-year-old employee. No investigation related to the tip-off had begun.

The employee worked at the company’s Paju regional branch overseeing apartment construction in new developments. He was discovered by a Paju resident in a storage container on an agricultural plot of land which he owned at 10:05 a.m. There was no note at the site.

According to police, the employee telephoned his family in the early hours of Saturday before sending them texts which said, “I’m sorry to leave you early.”

In the absence of evidence of foul play, police believe that the man took his own life.

The day before on Friday, an executive at LH was also found dead near his apartment in Bundang.

Police found a note in the executive’s home written by the man which said he was driven to suicide because he was the regional director of LH’s North Jeolla headquarters, where at least four employees suspected by the inquiry worked.

The news of a second employee death has added to the turmoil at LH, which is embroiled in allegations first made by two civic groups –– the People’s Solidarity for Participatory Democracy and Lawyers for a Democratic Society –– that 13 employees at the state-run company purchased land associated with the Gwangmyeong-Siheung New Town development using inside information.

The joint inquiry’s preliminary results announced Thursday added seven people from LH and the Land Ministry to those already named by the civic groups.

The Land Ministry on Friday also said it would seek new recommendations for candidates to fill LH’s CEO position from the company’s nomination committee, adding to the possibility of a protracted leadership void at the company.

LH has been without a permanent CEO since December, when Byeon Chang-heum resigned from the post to take up his post as Land Minister.

However, Byeon tendered his resignation to President Moon Jae-in on Friday after just three months, taking responsibility for the burgeoning scandal.

Of the 20 alleged cases uncovered by the government inquiry, 11 occurred while Byeon was CEO at LH.

According to the Blue House on Friday, Moon accepted Byeon’s resignation, but ordered him to finish up basic groundwork on a housing supply plan, including legislative changes that will fast-track development plans.

Controlling skyrocketing housing prices has emerged as a key priority of the Moon administration.

Prime Minister Chung Sye-kyun also announced Sunday that the purchase of land by LH employees for purposes other than those registered would be made illegal.

“In the case of agricultural land purchases, we will set up an audit system to ensure that land cannot be purchased if buyers have another intent other than what it is registered for," Chung said.

Meanwhile, the special task force under the National Investigation Headquarters of the Police Agency has commenced an expansion of its probe.

After announcing its preliminary results, the joint government inquiry has passed on the task of surveying nearly 23,000 employees at LH, the Land Ministry, local governments and regional state-run corporations, as well as their family members and acquaintances, to the special task force.

The total scope of the investigation is expected to encompass nearly 100,000 people.

To streamline its work, the special task force will work in tandem with the National Tax Agency and the Financial Services Commission to track loans and payments which were potentially used to back land purchases made by LH employees.

Unlike the police, which require a court warrant to conduct an investigation, the National Tax Agency has wide-reaching powers to examine transactions in cases of suspicious activity.

In response to the two recent deaths of LH employees, the investigative task force said that it was saddened, but that the probe would continue.