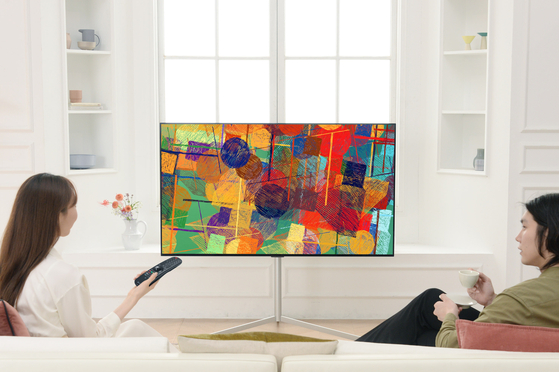 
European consumers emerged as the biggest buyers of LG Electronics’ organic light-emitting diode (OLED) TVs in 2020, as people opted for premium displays as they spent more time at home during the coronavirus pandemic.

Of the 2.05 million OLED TV sets sold last year, 970,000, or 47 percent of sales, were sold in Europe, according to an audit report the electronics maker released Monday.

The proportion has steadily grown since 2017, when Europe only accounted for 38.78 percent.

Backed by the robust OLED TV sales, Europe beat out North America in terms of overall sales at LG’s home appliance division for the first time since 2018 when it started tracking the data by region.

Analysts say the upbeat result is connected to the stellar performance of OLED models in different European consumer reports.

In awarding the highest mark, the company assessed that the TV has a great resolution, audio and field of view.

The OLED TV won a positive response at other consumer organizations and publications including Britain's Which France's Que Choisir, Germany's Stiftung Warentest and Italy’s AltroConsumo.

Asked why OLED TVs have gained traction in Europe, LG cited the polarization in the purchase of TV where consumers go for either budget or premium models.

“The coronavirus pandemic boosted the polarization in the TV market,” a source at LG Electronics said.

TVs priced below $500 accounted for 66 percent of sales globally back in 2018, but the share increased to 73 percent last year. North America used to be considered the target market for high-end TVs, but the average selling price of TVs sharply declined to $410.50 last year, slightly higher than in China.

Still, the figure for western Europe stood at $631.40, 53.8 percent higher than North America, according to market tracker Omdia.

To seize on the increasing demand, LG has led a wide variety of commercial campaigns in Europe.

It displayed a massive sign — 9 meter in width and 4.5 meter in height — promoting OLED TVs near the Europa Business Center in Vilnius, Lithuania with the phrase “Best TV for watching sports.”

With the skewed consumer preference for either low or high-end products, market insiders predict that OLED TVs could benefit.

Omdia projected sales of OLED TVs to jump by 60 percent to 5.6 million units this year.

“It will show stable growth this year too."