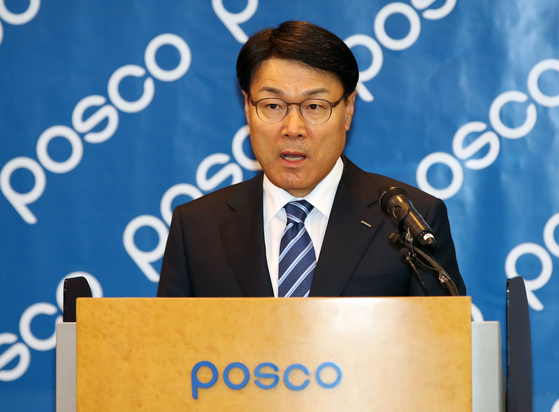 Posco's largest shareholder is abstaining from the vote on the CEO's second term.

The National Pension Service (NPS), which owns 11.1 percent of the steelmaker, will vote neither yea nor nay on the resolution for Choi Jeung-woo to serve for another three years.

The decision was made in a meeting of the NPS steering committee Tuesday night. It will attend the company's shareholder meeting, but it will remain silent and its vote will be divided up proportionally to those supporting and opposing Choi.

Choi, whose three-year term is nearing an end, has been blamed by several politicians for accidents that happened at the steelmaker's work sites. Critics claimed the frequency of accidents has increased since Choi took the helm. Some even went on to specifically say that the NPS should oppose Choi serving as chief executive for another three years.

According to the committee, opinions were mixed at the NPS meeting. Members supporting Choi said they did not find clear grounds to oppose his appointment, while opponents argued the CEO failed to the fulfill his responsibility to monitor business activities, and that the frequent industrial accidents hurt corporate value.

"There were no grounds to oppose in the [NPS] rulebook, but we also decided it was not adequate to cast a supporting vote either, considering there's a new law that places more responsibility on chief executives for industrial accidents," the committee said in explaining as to why it chose to stay neutral.

The law mentioned is the Severe Accident Punishment Act under which executives and companies will be more accountable for workplace injuries or death if safety measures are not sufficient. It passed the National Assembly in January and will be put into effect on January 2022.

Posco's shareholder meeting will take place on March 12. In a letter sent to investors earlier this month, Choi pledged to continue developing the company's future growth engines, such as rechargeable battery materials and the hydrogen business.

The NPS's decision was met with criticism from several politicians Wednesday. Noh Woong-rae, a member of the Supreme Council of the ruling Democratic Party (DP), said the NPS was "neglecting its responsibility" as an institution that manages funds raised from the public.