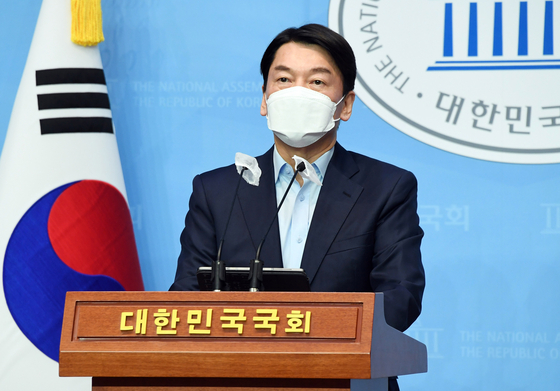 Ahn Cheol-soo, head of the minor opposition People's Party, announces his bid to run for Seoul mayor next year at a press conference at the National Assembly on Sunday. [YONHAP]


Ahn Cheol-soo, head of the minor opposition People’s Party, announced Sunday he will be running for Seoul mayor next year, his second shot at the job.

Announcing his bid during a press conference at the National Assembly on Sunday, Ahn said he hopes he will be the sole candidate from the opposition bloc.

“If we [the opposition bloc] lose the mayoral race, then we could have less of a chance overturning the presidential power, and that’s something we ought to prevent at all costs,” Ahn said during the press conference. “The reckless ways of the current administration must be put to an end. […] That is why I have decided to join the race.”

Opposition lawmakers have been critical of the way the ruling Democratic Party has been using its majority in the Assembly to steamroll bills in the past months, including several controversial bills on prosecutorial reform and tenant rights.

A mayoral by-election is slated for April 2021 to fill a vacancy left by Park Won-soon, who committed suicide in July after a secretary accused him of sexual harassment. He was in his third term as mayor of Seoul, the longest anyone has held that position.

“With policies based on common sense and reason, we should be able to get through the difficult times of Covid-19 and the hellish situation of the real-estate market,” Ahn said.

Ahn flirted with the idea of running for mayor of the capital city in 2011, and had over 50 percent support in surveys conducted a month before the election. But he ended up not running and supporting Park. In 2018, he tried to block Park from re-election, but came in third place after Park and Kim Moon-soo, former Gyeonggi governor.

Ahn also failed in two presidential bids. He ran as an independent in 2012 but bowed out, endorsing then-candidate Moon Jae-in. He ran again in 2017, but finished in third place after President Moon Jae-in and Hong Joon-pyo, former chairman of the Liberty Korea Party (LKP), predecessor to today’s main opposition People Power Party (PPP).

Ahn was considered a possible contender for the presidential race in 2022.

In announcing his mayoral bid, Ahn addressed the issue of running for president again in 2022.

“Given the state the nation finds itself in, I realized this is no time for me to consider running for the presidency,” he said.

Technically, if Ahn is elected Seoul mayor in April 2021, there is nothing to stop him from resigning and running for president in March 2022. When asked about this by a reporter following the press conference, Ahn nixed that possibility.

Ahn founded the People’s Party in 2016, which won 38 seats in the Assembly in 2016 and temporarily led to a three-party system in Korea’s National Assembly.

Before he began his political career, Ahn was a physician and software entrepreneur. He was a medical officer in the Korean Army from 1991 to 1994, before founding AhnLab, Korea’s largest antivirus software company, in 1995. The company went public in 2001 after raking in huge profits from a nationwide computer-virus outbreak in 1999.

After that, Ahn resigned from his chief executive position and went to the United States to study business management at the Wharton School of the University of Pennsylvania. He returned to Korea in 2008, when he was hired as chair and professor at the KAIST from 2008 to 2011, and as dean of Seoul National University Graduate School of Convergence Science and Technology from 2011 to 2012.

During this time, Ahn served as an advisory member on several Lee Myung-bak administration presidential councils.

Ahn gained popularity as a professor when he appeared on MBC TV’s “Guru Show” in June 2009. The episode highlighting Ahn’s life got almost 20 percent of viewer ratings. He became even better known to the public when he started hosting “Youth Concert,” a series of lectures given to university students across the country, together with doctor-turned-investor Park Gyeong-cheol.