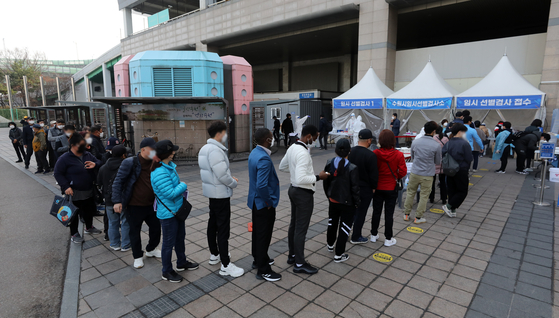 A long line of people wait to get Covid-19 tests Sunday near Suwon Station in Gyeonggi Sunday, the first weekend after the Gyeonggi provincial government ordered foreign workers to get tested after major outbreaks in foreign communities. [NEWS1]


Some gatherings of up to eight people, such as parents meeting before a wedding, will be permitted starting Monday while Korea maintains its current social-distancing level for another two weeks as cases continued to surge above 400 over the past week.

The government said Saturday that the current social distancing scheme will be extended to March 28, with Level 2, the third highest in the country's five-tier system, implemented in the greater Seoul area and Level 1.5 in other regions.

While the ban on gatherings of five or more people will also be extended over this period, some exceptions will be made for special family gatherings such as a baby’s first birthday or a meeting between families ahead of a marriage.

Gatherings of up to eight people will be allowed for toddler meet-ups involving children under six, but only four can be adults. Family members had been exceptions to the ban on gatherings of five or over, but are now limited to a maximum eight people due to the increase in transmissions among relatives.

The government has also been finalizing a new four-tier social distancing scheme for later this month, envisioned to give more autonomy to small businesses, but the continued spike in cases may hinder such plans.

Korea reported 459 new Covid-19 cases on Saturday, including 436 local infections, bringing the total cases to 95,635, the Korea Disease Control and Prevention Agency (KDCA) said Sunday. This comes despite a decrease in cases usually seen over the weekend.

There were two more fatalities, raising the total death toll to 1,669. 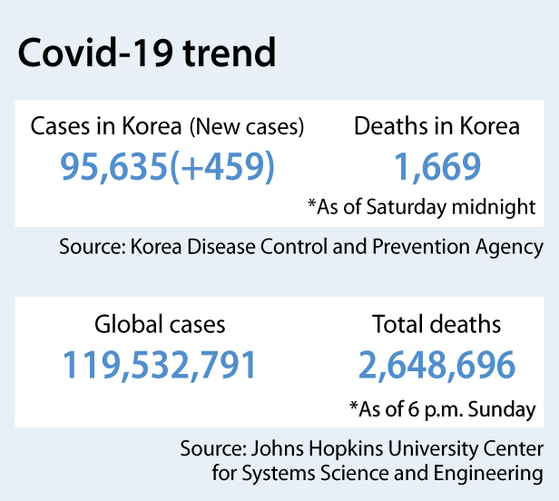 There were 23 new imported cases on Saturday, including six from the United States, three from Pakistan and two each from Mongolia and Ukraine.

Of the local infections, 108 were reported in Seoul, 199 in Gyeonggi and 19 in Incheon, with infections at a school, a dance class, an insurance company and factories. The greater Seoul area constituted 75 percent of domestic infections.

A cluster of infections at a Gangdong District high school in eastern Seoul added three cases, bringing the total to 27 infections, of which 22 were students and the rest family members.

A furniture factory in Anseong, Gyeonggi reported 10 cases after reporting the first case on March 4.

Other infections outside the greater Seoul area included 52 in South Gyeongsang, 16 in Gangwon and 13 in Busan.

A bathhouse in Jinju, South Gyeongsang so far has been linked to a total of 133 cases, adding 40 as of Saturday midnight.

“It took less than 20 days for the number of daily confirmed cases to soar to 1,000 after surpassing 500 at the end of November last year, at the start of the third wave of infections,” Prime Minister Chung Sye-kyun in a Covid-19 meeting Sunday warned. “The government will do its best to reduce the number of daily cases to 200 over the next two weeks.”

So far, 587,884 people, or 1.45 percent of the country’s population of 52 million, have received their first shots since the vaccination program kicked off on Feb. 26 with AstraZeneca and Pfizer jabs.

The KDCA confirmed Sunday that a man in his 50s residing at a nursing home who had an underlying condition died on Saturday over eight days after receiving a vaccine shot.

A second person in their 20s died also after receiving a vaccine shot. There are 16 deaths reported of people who have been vaccinated, though health authorities say there was no confirmed causal link between the deaths and the vaccinations.

There are 74 reported cases of suspected anaphylactoid reactions, while 8,423 people reported milder reactions to vaccinations.

The government is set to announce on Monday a more detailed plan for the second round of vaccinations starting April.