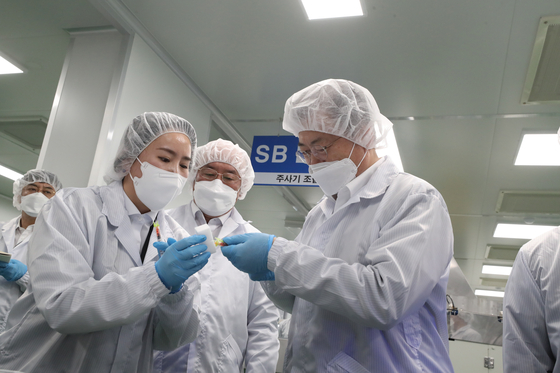 
At least five clusters of Covid-19 infections were confirmed from Lunar New Year gatherings as daily cases remained in the 600s for a second consecutive day.

The Korea Disease Control and Prevention Agency (KDCA) said Thursday that over the four-day holiday last week, one family gathering from Gyeongsan in North Gyeongsang led to nine Covid-19 cases after the first patient was confirmed on Wednesday.

In Busan's Yeongdo District, a Lunar New Year family gathering has led to six infections, and in Bonghwa County in North Gyeongsang, seven cases have been confirmed after a first patient tested positive Tuesday. Two other clusters were also found in Busan.

“There is a possibility that more cases will be discovered taking into consideration the incubation period [of the virus],” said Kwon Jun-wook, the deputy director at the KDCA, in a briefing Thursday. “Because we had coronavirus cases in the triple-digits when we went into the Lunar New Year holiday, there is a high likelihood that we will have more [holiday family gathering infections] than the 11 cases from the Chuseok holiday last year.”

Korea reported 621 new Covid-19 patients, the same as the previous day, as of Wednesday midnight, the KDCA said Thursday, bringing total cases to 85,567.

The country reported six more fatalities, raising the total death toll to 1,544. There are 161 severely ill or critical patients.

The surge comes after infections dropped into the 300s and 400s in the past week, in large part due to less testing over the Lunar New Year holiday last week, bringing the daily average in the past week to 448. 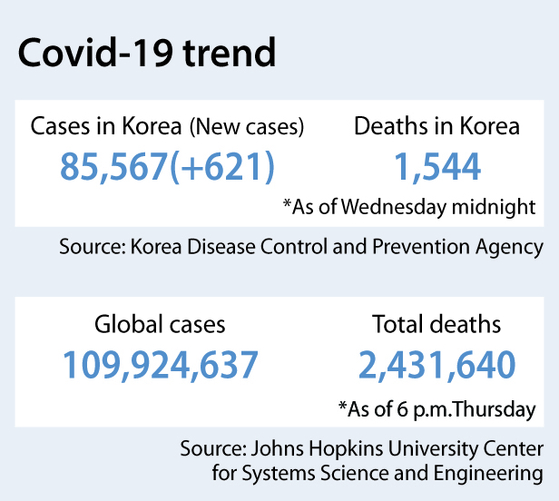 Of 31 imported cases, 11 were from the United States, three from Jordan and six from Europe.

The country has also been dealing with major clusters at industrial sites, hospitals, religious facilities and cram schools.

A cluster of infections at a plastic factory in the Jingwan General Industrial Complex in Namyangju, Gyeonggi, reported as of Thursday a total of 123 Covid-19 patients, mostly foreign workers who resided in the factory dormitory.

The first patient, a Cambodian factory worker, was found positive Saturday after getting tested at a hospital in Yongsan District, central Seoul, after showing fever symptoms. This led to tests of some 1,200 workers at the complex, with 951 results negative so far.

A cluster of infections at a Kiturami Boiler factory in Asan, South Chungcheong added 21 cases, bringing total infections to 135 as of Thursday, according to the KDCA.

In Bucheon, Gyeonggi, infections at a complex run by Victory Altar, a Christian new religious movement, and a nearby cram school added three cases, raising the total infections to 154.

Since Monday, social distancing measures were lowered a notch from Level 2.5 to Level 2, the third highest in a five-tier system, in the greater Seoul area and from Level 2 to Level 1.5 for other regions. The ban on gatherings of five or more people has been retained.

The current social distancing scheme is set to run through Feb. 28. The government has been planning a new scheme to allow greater public “autonomy and responsibility,” especially to address the woes of small businesses. A post-holiday spike could be a setback to such plans and force the government to implement stricter measures such as restricting operating hours for restaurants and other businesses to 9 p.m. again from the 10 p.m. curfew in the greater Seoul area place starting this week.

Yoon Tae-ho, a senior health official overseeing quarantine policy said, “If the current wave of infections beings more proliferation, confusion may arise through a new social distancing system,” adding, the government “may have to review the timing” again.

Korea is set to begin its first vaccinations Feb. 26 with an initial batch of AstraZeneca vaccines. People under the age of 65 in nursing homes and other high-risk facilities will be the first to be vaccinated, after the KDCA said that the inoculation of people 65 or older with the AstraZeneca vaccine will be postponed until additional clinical data is available next month about its effectiveness in the elderly.

The KDCA said that five vaccinations centers will open later this month and aims to eventually open 232 state-run facilities nationwide. The centers will be equipped with cold chain storage capabilities needed for mRNA vaccines from Pfizer and Moderna. Another 18 regional vaccination centers are in the works, bringing the total inoculation sites to 250.

Health authorities and related agencies will conduct a second round of mock drills starting Friday to practice the transportation and inoculation of Covid-19 vaccines.

Military planes including a Lockheed C-130 Hercules transport aircraft will be mobilized to conduct drills to deliver the vaccines to remote areas such as Jeju and Ulleung islands.