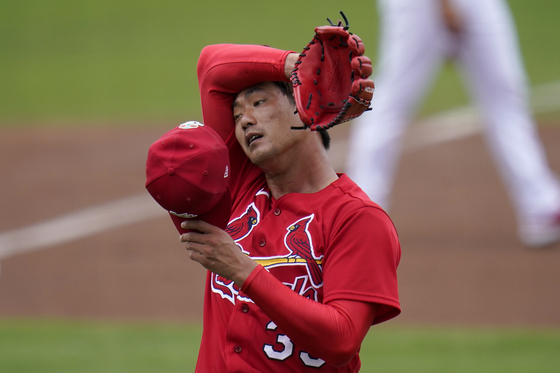 
Kim Kwang-hyun of the St. Louis Cardinals is out with a back injury, a big blow to the Cardinals who are already struggling with injuries before the 2021 season even begins.

Before a spring training game against the Miami Marlins on Saturday, Cadinals’ manager Mike Shildt announced that Kim Kwang-hyun would not be appearing after experiencing back stiffness in the middle of a recent bullpen session.

“I don’t think it’s a huge setback,” Shildt said, “but nonetheless a setback.”

Kim was originally scheduled to start Saturday’s game, but the team abruptly changed the starting lineup to bring in Daniel Ponce de Leon.

The Cardinals said Kim will be given some time to recover and reset, without mentioning exactly when he is expected back.

Kim has appeared in two exhibition games so far, but has struggled with seven earned runs, and 10 hits in just three innings.

The Cardinals were already struggling as pitcher Miles Mikolas is also out for the next seven to ten days due to right shoulder pain. Kim was third in the starting rotation and Mikolas fourth.

Without Mikolas and Kim, the team has to come up with a plan to fill the rotation gap before the new season begins in less than a month.

“We don’t anticipate it being long, but clearly, we don’t know exactly what that timeframe looks like,” Shidt said of Mikolas. “So clearly that opened up a spot in the rotation to start the season, and possibly the same thing with [Kim.] Can’t rule it out.”

St. Louis starts the 2021 season with a three-game series against the Cincinnati, starting on April 2.

Jack Flaherty and Adam Wainwright are scheduled to start the first and second game, and Ponce de Leon could step in to to take Kim’s spot in the third game.