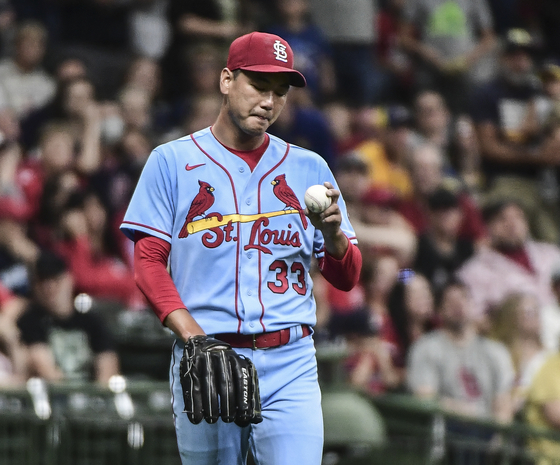 
Kim Kwang-hyun of the St. Louis Cardinals could lose his spot in the rotation as the major league enters the final few weeks of the 2021 season.

Speaking to press on Monday, Cardinals manager Mike Shildt wouldn't commit to Kim returning as a starter in Thursday's game against the Los Angeles Dodgers. When asked if Kim or Jake Woodford would get the nod, Shildt said, "We'll see."

Kim has played as a starter for nearly his entire MLB career. After joining the Cardinals last year, Kim spent a single game in the bullpen before getting the nod to start as the team struggled with Covid-19 cases.

Kim remained a starter for the rest of the 2020 season and most of this season, becoming one of the most reliable pitchers in the Cardinals' rotation in June and July.

The Korean southpaw missed a large part of August due to an injury and returned in the bullpen on Aug. 24. He has had two starts since then, but given up five runs in a total of five and two thirds innings pitched, raising questions about Kim's reliability as the season dies down.