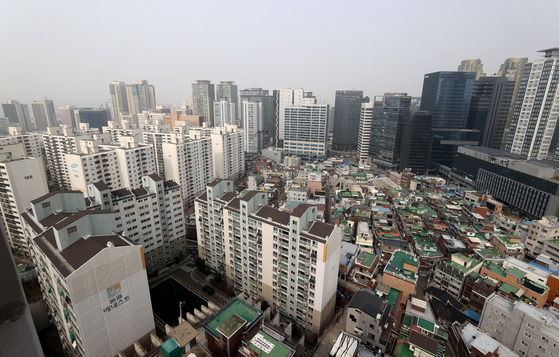 View of apartments in Gongdeok-dong, Mapo in Seoul on March 15. Seoul's apartment assessed value for this year saw the sharpest increase since 2007. [YONHAP]

Owners of high-end apartments are in for bigger tax bills.

According to the Ministry of Land, Infrastructure and Transport on Monday, the average assessed value of apartments nationwide increased 19.08 percent for 2021. This is a big surge compared to the 5.99 percent increase last year and the sharpest increase in 14 years.

The assessed value of apartments surged 22.73 percent in 2007, the last year of the Roh Moo-hyun administration.

President Moon Jae-in was chief of staff for Roh, and his administration has tried cooling real estate prices as a chief economic priority, as Roh did.

But under Roh and Moon, apartment prices actually rose despite the governments' attempts to tame them.

The assessed value of apartments in Seoul rose 19.91 percent on average, compared to a rise last year of 14.75 percent. Again, it was the sharpest hike since 2007's 28.4 percent.

The administrative city of Sejong recorded the sharpest hike: 70.68 percent, an all-time record for any year or place. Sejong is home to major government departments including the Finance Ministry, Land Ministry and the Trade and Industry Ministry.

The median assessed value of apartments in Sejong for the first time exceeded that of Seoul.

Other regions that saw sharper increases than Seoul were Gyeonggi and Daejeon.

The Moon government introducing 25 sets of measures since taking office in 2017 to cool real estate prices, including higher taxes, loan restrictions and promises of increases in supply of apartment. On Feb. 4, it vowed to increase supplies of residential units by 830,000 by 2025. And yet apartment prices have continued to rise.

This year, the government applied 70.2 percent of the market value of an apartment when assessing its value for the sake of taxes. That’s a 1.2 percentage point increase from 2020’s 69 percent.

The Moon government has been raising that ratio to increase taxes on property owners, hoping it would lead to a sagging of selling prices.

The government last year announced its planned to raise the ratio.


The government claims that increases in assessed value will not have a major tax impact on the majority of the apartment owners.

According to the Land Ministry, apartment with assessed values below 600 million won account for 92.1 percent of the total, or 13 million units.

It said due to changes in property taxes, people who owns a single apartment with an assessed value of 600 million won or less will enjoy a 0.05 percent cut in their property tax this year compared to last. Last year the property tax was 0.1 percent, which has been lowered to 0.05 percent.

In the case of Seoul, which has 2.58 million apartments, the second-largest number after Gyeonggi's 3.92 million, 70.6 percent are assessed at 600 million won or less.

According to the government, a person who owns an 84 square-meter apartment in Seoul will pay 10 percent less real estate tax this year than last, even if the assessed value has been raised 19 percent.

However, this tax cut is only good for three years.

People who own apartments assessed at 900 million won or over, which makes them liable for the comprehensive real estate tax imposed by the central government in addition to property taxes levied by local governments, accounts for only 3.7 percent of all apartment owners, the government says.

The government stressed that it is operating programs that will cut some taxes, including applying a maximum cap on property taxes as well as allowing several payments.

People who owe more than 2.5 million won in property tax can pay in two installments.