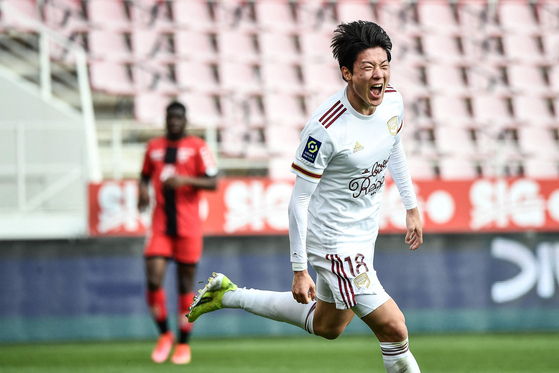 Bordeaux's Korean forward Hwang Ui-jo celebrates after scoring a goal during a Ligue 1 match against Dijon at the Gaston Gerard stadium in Dijon on Sunday. [AFP/YONHAP]

Hwang found the back of the net twice, first in the 33rd minute and again in injury time at the end of the first half at Stade Gastong Gérard in Dijon, France on Sunday.

Hwang received a pass from midfielder Mehdi Zerkane in the 33rd minute of the first half, picking up the ball in the penalty area to fire a shot into the back of the net with his right foot.

Hwang was back just 12 minutes later to head in Nicolas de Préville’s cross to take the score to 2-0 to Bordeaux.

After assisting Hwang's second goal, De Préville returned at the top of the second half to pick up one of his own, giving Bordeaux a comfortably 3-0 lead.

Hwang was substituted for Jimmy Briand in the 72nd minute of the game with the score still 3-0. Dijon’s Moussa Konaté was able to pick up one consolation goal in the 90th minute, but Bordeaux still headed home with a big 3-1 victory.

Carried by a double from Hwang and a goal from De Préville, the Girondins put an end to a three-game slide and seven games without a win, climbing back to 11th place with 36 points.

Dijon, sitting solidly in the relegation spot at the bottom of Ligue 1, have now lost nine games.

Hwang's two goals follow a month of silence after a match against Brest on Feb. 7.

Marking his seventh and eighth league goals this season, the Bordeaux forward has broken his personal scoring record, up from six in the 2019-20 season.

Despite Hwang's Ligue 1 success, he was not included in a provisional 24-man roster for the Korean national team for an upcoming friendly against Japan, announced on Monday by head coach Paulo Bento.

Hwang's absence is likely because Bordeaux declined to release him for the fixture due to Covid-19 quarantine measure. Under temporarily revised FIFA guidelines, clubs are not required to release players for international fixtures if they are required to quarantine for at least five days upon their return.

Is this the end of the road for Bordeaux and Hwang Ui-jo?