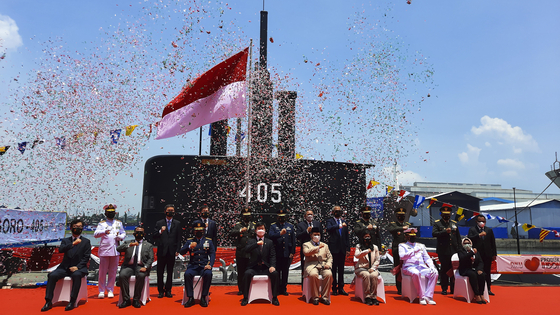 Kang Eun-ho, head of Korea's Defense Acquisition Program Administration, attends a ceremony in Indonesia on Wednesday to mark the handing over of a 1,400-ton submarine to its navy. The 61-meter (200-foot) submarine, dubbed Alugoro, was the third unit Korea delivered to Indonesia under a 1.3-trillion-won ($1.15 billion) contract in 2011 to export three submarines to the Southeast Asian country. Daewoo Shipbuilding & Marine Engineering delivered the first two submarines to the Indonesian Navy in 2017 and 2018, and the last unit's main body was delivered to Indonesia earlier for final assembly by local shipbuilder PT PAL. Indonesia signed another deal with Korea in 2019 to purchase three additional submarines, but the project has made little progress. [YONHAP]