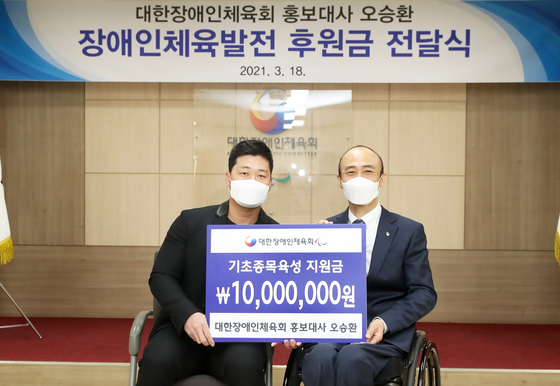 
Oh, who is one of the most dominant closers in KBO history, has been working with the KSAD since December 2016 and is a goodwill ambassador for the organization.

Over the past five years he has donated a total of 60 million won to the organization, including personally supporting wheelchair tennis players Im Ho-won and Kim Myung-je and Paralympic gold medalist nordic skier Sin Eui-hyun, who competed at the 2018 PyeongChang Paralympic Games with support from Oh.

Oh, known as the Stone Buddha for his unflappable approach at the plate, pitched for the Lions from 2005 to 2013, winning five championships. Between 2014 and 2019, Oh played for the Hanshin Tigers in Japan's Nippon Professional Baseball league and the MLB's St. Louis Cardinals, Toronto Blue Jays and Colorado Rockies, before returning to Korea.

Oh, who has struggled with injuries during his career, started supporting the KSAD after seeing its athletes train while going through his own rehibilitation.