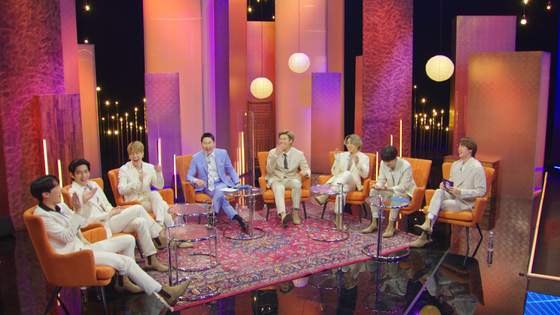 A captured scene of the upcoming talk show ″Let's BTS″ features members of boy band BTS and M.C. Shin Dong-yeob sitting down for a 100-minute talk. The show will air on KBS 2TV on March 29 at 10:40 p.m. [KBS]


A 100-minute talk show "Let's BTS" will air on March 29 on KBS 2TV, where the septet will discuss its music and Grammy nomination.

KBS announced on Tuesday that the show will feature the seven members of BTS and M.C. Shin Dong-yeob along with special guest comedian Jang Do-yeon.

BTS was nominated for the Best Pop Duo/Group Performance award at the 63rd Grammys last November for its English single "Dynamite" (2020), which topped the Billboard 100 singles chart, a first for a K-pop act.

While BTS didn't win the award, it went to Ariana Grande and Lady Gaga's "Rain On Me" (2020), the band did get a chance to perform solo during the Grammys' Premiere Ceremony on March 14, also a first for a K-pop band.

"Having sported amazing charisma on stage, the members seemed quite nervous on the show's set," KBS said.

"But as time went on, the mood became softer and the talk show was filled with their unique sense of honesty and humor."