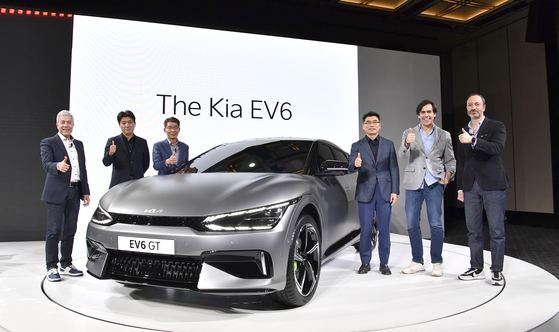 Kia CEO Song Ho-sung, third from left, poses with the EV6 at a global premiere event on Tuesday. [KIA]

The EV6, Kia's big bet on all-electric cars, is faster, sportier and drives longer than Hyundai Motor's Ioniq 5, its cousin and rival in the market.

The EV6 and Ioniq 5 are made on the same manufacturing platform, the E-GMP, which is shared between the sister companies. But Kia's car has sportier proportions and exterior design and a stronger battery, hinting at how Kia wants to position itself in the electric vehicle (EV) market.

“The EV6, which symbolizes Kia’s transformation [into a mobility solution provider], has been designed to offer dynamic design, progressive technology and mind-blowing performance,” said Song Ho-sung, CEO and president of Kia, in an online global premiere of the vehicle Tuesday.

“This model is the start of Kia’s Plan S," Song continued, "which aims to have 40 percent of our sales dedicated to eco-friendly vehicles by 2030.”

Kia has made an all-electric car before, the Niro, but it also came in hybrid and plug-in hybrid models. The EV6 is its first dedicated EV.

Head on, the EV6 has more character than the Ioniq 5, with a reinterpretation of Kia’s signature Tiger Nose grille, which has been rechristened the Digital Tiger Face. The grille has been minimized and a rather large air intake has been placed underneath the bumper for a wide and low look.

On the side, the EV6 has a wing-type roof spoiler, which Kia says reduces noise and air resistance. It also acts as a roof for the rear window, which is why the vehicle no longer has rear windshield wipers, Kia explained.

The EV6 GT model will boast a 430-kilowatt dual motor that generates up to 584 horsepower. Kia says the high-performance models can reach 100 kilometer per hour in 3.5 seconds, the fastest of all Kia’s past cars including the Stinger GT, which took 4.9 seconds.

“[We wanted to give] a feel similar to Kia’s dynamic cars from the past,” said Karim Habib, a senior vice president at Kia responsible for design, “like the spirit of the Stinger.”

The long-range trim has a 77.4 kilowatt-hour (KWh) battery that is capable of driving 510 kilometers based on Europe’s WLTP (Worldwide Harmonized Light Vehicle Test Procedure) standards. On the Korean standard, Kia expects it to be able to drive 450 kilometers per charge, longer than the equivalent trim of Hyundai Motor’s Ioniq 5, which can run 430 kilometers per charge. The Ioniq 5's long range version comes with a smaller 72.6 KWh battery.

Kwon Hyuk-ho, vice president of Kia in charge of domestic sales, said that enhanced battery quality contributed to a price markup for the EV6.

The long-range trim’s price will start in the mid-50 million won range, according to Kwon, and the GT model will sell from 70 million won. 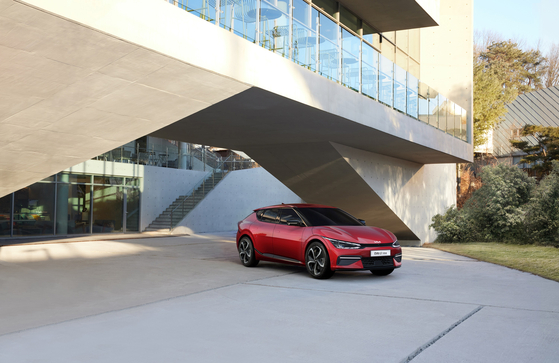