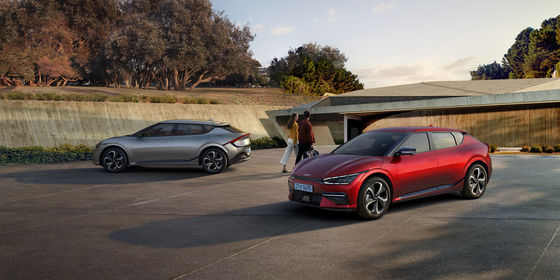 More than 30,000 orders had been made for the model since its premiere in March, according to the carmaker, and deliveries will start from next week after the factory’s summer vacation finishes at the end of the first week of August.

Kia’s EV6 is oftentimes compared to the Hyundai Motor Ioniq 5 because they are made on the same EV-dedicated E-GMP platform, but the EV6 has a longer range and is cheaper.

The standard version of the EV6 is equipped with a 58 kWh battery and is certified at 370 kilometers per charge.

Nearly 70 percent of the customers who placed orders on the Kia model picked the long-range version, according to the carmaker on Monday.

Another 24 percent of the customers picked the GT-Line which is a version added with extra design features that emphasizes dynamic driving.

Only four percent of those who made orders picked the standard version.

The EV6 is expected to compete not only with the Ioniq 5 but imported models that got a head-start in Korea's EV market.

Tesla's Model 3 and Model Y dominated the country's passenger EV market in the first half, ranking No. 1 and No. 2 with 43 percent of the market.

Mercedes-Benz recently introduces the all-electric EQA SUV, which is priced under 60 million won.

Opposites attract for the EV6