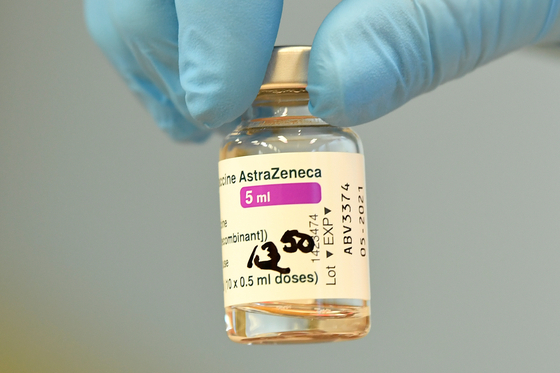 
With AstraZeneca vaccines supplies delayed, health authorities said they will use some second dose reserves and expand the inter-dose interval for patients if necessary.

Kim Ki-nam, an official of the Ministry of Health and Welfare, said in a press briefing Tuesday, "For AstraZeneca vaccinations, we have been using second dose reserves in the first inoculation stage, without disrupting second shot schedules."

AstraZeneca vaccines require two shots with an inter-dose interval of eight to twelve weeks. Korea rolled out its vaccine program last week for people 65 to 74 at nursing homes and convalescent hospitals.

"The inter-dose interval is currently ten weeks," Kim added, "but we are considering changing the period [to up to] 12 weeks if necessary, depending on the supply situation."

On Monday, authorities announced that a planned delivery of AstraZeneca vaccines had been pushed back to the third week of April, with increasing competition for vaccines around the world and production delays by the manufacturers.

South Korea planned to take delivery of 690,000 doses, or shots for 345,000 people, of the AstraZeneca vaccine through the Covax Facility, the World Health Organization (WHO)'s multilateral vaccine-sharing mechanism, on March 31 from the Netherlands.

However, the AstraZeneca supplies are running short and that delivery has been reduced by nearly 40 percent to 432,000 doses. The balance will be delivered in the third week of April.

Jeong Eun-kyeong, Korea Disease Control and Prevention Agency (KDCA) commissioner, said at a regular briefing on Monday, "This reflects the difficulties of the international supply situation, and Covax has made adjustments to the amount and timing of vaccination supplies to provide the vaccines to all participating countries by the first half of the year."

The U.S. recently announced that they would source 600 million doses of vaccines for the entire nation within May, and India, the world's biggest vaccine maker, temporarily halted AstraZeneca vaccine exports as infections surge within its borders. 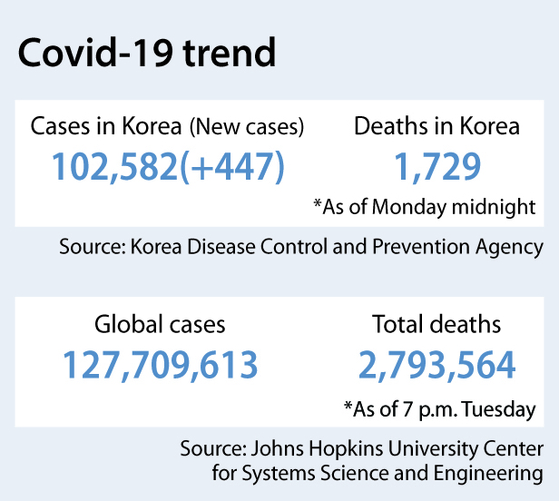 After the announcement, concerns were raised about Korea's inoculation plan.

Starting April 1, the second quarter of the inoculation plan will begin with Pfizer shots for people aged 75 or over, followed by AstraZeneca vaccination for teachers at special schools for children with disabilities and health teachers at day care centers.

Jung Ki-suk, a professor of pulmonary care at Hallym University's Sungsim Hospital, said, "If the [second shots] are used in advance, people might not be able to get their followup shots if they don't arrive on time.

"If the supply is in shortage," he said, "the inoculation of new patients should be pushed back."

Since Feb. 26, when the country started vaccinations, a total of 822,448 people have been given first shots, including 26,538 people on Monday.

Some 6,151 people have completed the two-dose course.

There were 18 new imported cases, including four from Poland, and two each from Hungary and the United States.