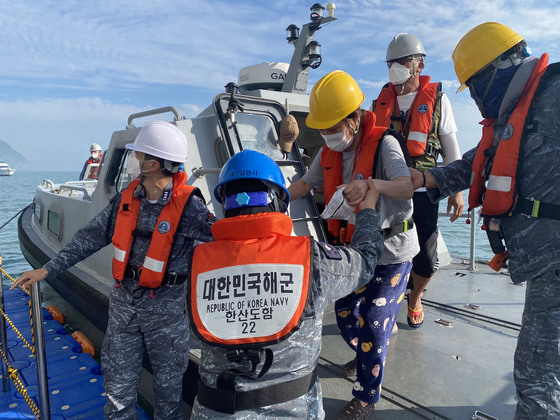 Helped by sailors, a resident from a remote island arrives on Korea's first military training vessel, Hansando, off Jin Island, South Jeolla, on Tuesday. The Navy has conducted an operation to help residents from remote islands, devoid of medical facilities, receive Covid-19 vaccine shots at a mass vaccination center installed on the ship. [YONHAP]


People who registered to get the AstraZeneca Covid-19 vaccine in Korea this month but had their vaccine appointments delayed due to supply shortages will have to reserve for a Pfizer shot instead, starting Wednesday.

New reservations for the vaccination will be held for eight days, from midnight on June 23 until 6 p.m. on June 30.

Those who did not make a reservation during the recommended period from May to June or canceled due to personal issues will not be eligible for the new booking.

Korea started inoculating the elderly aged 60 to 74 with AstraZeneca vaccines from May 27 to June 19, stressing the importance of seniors registering for vaccine shots as the elderly population has a higher risk for fatality or serious illnesses than that of other age groups — and that those who did not get their vaccines during the recommended period would have to wait until the fourth quarter for another chance.

However, after announcing various incentives and opening a reservation system for leftover vaccines, vaccine supplies fell short across the country, resulting in some people who were booked for shots on June 18 and 19 not being able to get the shots.

As a result, the Covid-19 Vaccination Task Force announced that the government will offer Pfizer jabs to around 200,000 people, including those aged 60 to 74 and patients with chronically severe respiratory diseases.

Those who wish to get their shot can make a reservation through the national vaccine registration website (ncvr.kdca.go.kr). They can also sign up by calling the Korea Disease Control and Prevention Agency (KDCA)'s 1339 hotline or their local government’s call center. Family members of the elderly can also book the vaccine on their behalf.


Inoculations will take place at vaccination centers nationwide from July 5 to 17. The second shot will be given three weeks after the first.

After the announcement was made, many were disappointed by the new appointment schedule.

Those who most recently got their AstraZeneca shots were left bewildered by the government’s announcement, as the government does not give a choice on which vaccine they get.

“My mother didn’t want to get the AstraZeneca vaccine, and many of her friends were avoiding it,” Ms. Kim, who lives in Songpa District, southern Seoul, said. “I finally convinced her and she got her shot last Friday, so it’s frustrating that now they’re giving Pfizer.”

Many on online forums also expressed their regret, saying, “I would’ve waited if I knew this was going to happen,” or “It’s like being the last one to arrive at a cafeteria and getting all the delicious food left.” 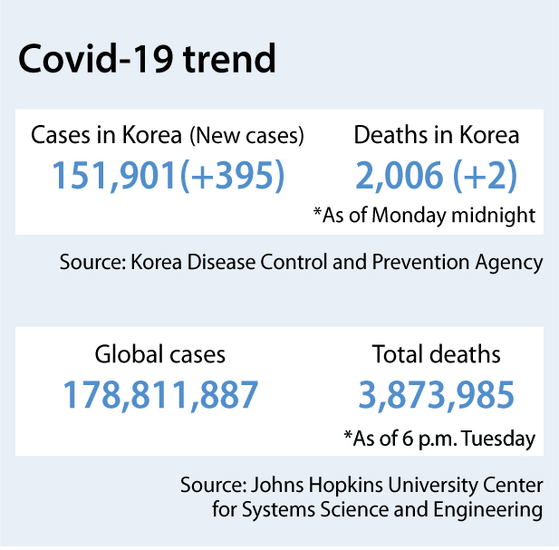 Korea reported 395 new cases of Covid-19 on Tuesday, including 351 local infections, raising the total caseload to 151,901, the KDCA said.