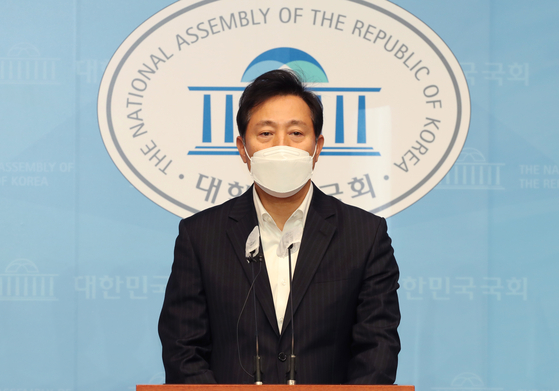 “I am making an earnest offer to Ahn in order to consolidate opposition candidates,” Oh, a two-time mayor of Seoul, said in a press conference at the National Assembly on Thursday.

“Please join the PPP," he said, addressing Ahn. "If you decides to merge your party with the PPP, that is even more desirable."

Oh continued, saying "If Ahn does so, I won’t run in the by-election and do my best for our victory.”

Mayoral by-elections will take place in Seoul and Busan on April 7, 2021 to fill positions vacated by members of the ruling Democratic Party (DP) politicians. Seoul Mayor Park Won-soon committed suicide in July after a sexual harassment accusation made by his former secretary. Busan Mayor Oh Keo-don stepped down in April 2020, admitting to sexually molesting a city employee.

Oh Se-hoon said he will have to declare his own bid if Ahn turns down the offer to work with the PPP. “I did not consider my political interests when making this offer,” Oh said. “I only considered the candidate consolidation of the opposition parties.”

Oh said that if conservatives unite with the Seoul mayorship it will create momentum for the presidential election in 2022. “Using this opportunity to merge the conservative opposition forces will maximize our possibility of presidential victory,” Oh said.

Oh, a lawyer who started his political career by winning a legislative election in 2000, became Seoul mayor in 2006 and was re-elected in 2010. He stepped down in August 2011 after losing a referendum on a plan to offer free school lunches to only 30 percent of Seoul's students, not all. 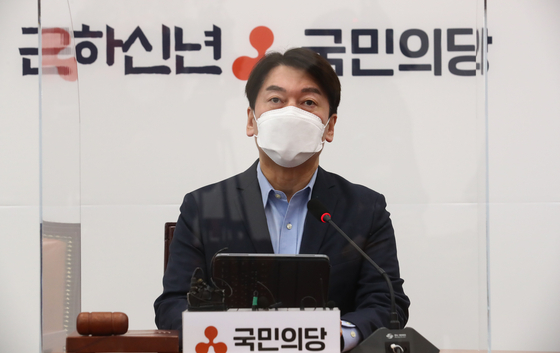 
Ahn is a medical doctor and software entrepreneur who made unsuccessful presidential bids in 2012 and 2017. He also flirted with the idea of running for mayor of Seoul in 2011 but ended up not running and endorsed Park, although he had over 50-percent support in surveys conducted a month before the election. In 2018, he ran against Park, but came in third.

Oh’s proposal is the latest in a series of PPP attempts to prevent a split in conservative votes, which have cost them in the past. In the 2017 presidential election, President Moon Jae-in was elected with 41.08 percent. Hong Joon-pyo of the Liberty Korea Party, the predecessor of today’s PPP, scored 24.03 percent and Ahn 21.41 percent. Together, the two conservative candidates scored 45.44 percent.

Another PPP leader also made an offer to Ahn. Rep. Chung Jin-suk, head of the nomination committee for the April by-elections, said Wednesday that the party will select candidates for the Seoul and Busan mayoral races based on opinion polls.

Chung told the JoongAng Ilbo that the PPP will change its primary rules for Ahn's sake. Instead of holding a vote of PPP members to select the mayor candidate, the party is willing to make the decision based on public opinion polls, Chung said. Ahn has been leading many opinion polls on the Seoul mayoral race.


"We want to open the party's door to outside contenders," Chung said. "We hope Ahn will take our intention seriously because the largest opposition party is changing the rules [for him]."

Excluding Oh, seven PPP politicians have so far declared bids in the Seoul by-election and more are expected to do so. Ahn is the clear frontrunner in opinion polls among all opposition contenders.

According to a survey by WinGKorea Consulting announced Tuesday, Ahn scored 28.5 percent, while former Rep. Na Kyung-won of the PPP was backed by 12.9 percent and Oh 12.6 percent. The poll, conducted over the weekend, had a 95-percent confidence level and the margin of error was plus or minus 3.1 percentage points. More details are available on the Internet site of the National Election Survey Deliberation Commission.

The PPP’s acting leader, Kim Chong-in, also had a meeting with Ahn, a source close to Ahn said Thursday. The meeting took place Wednesday morning after Ahn telephoned Kim with an invitation.

“No aides accompanied them,” the source said. “The meeting was just a brief exchange of New Year’s greetings.”

The source denied that Ahn and Kim had talked about a candidate merger, but the rare event fueled speculation that a merger is imminent.

Meanwhile, Minister of SMEs and Startups Park Young-sun said Wednesday that she is considering running in the Seoul mayoral race. If she declares a bid, the former four-term lawmaker will be the second politician in the DP to seek the nomination after former Rep. Woo Sang-ho. 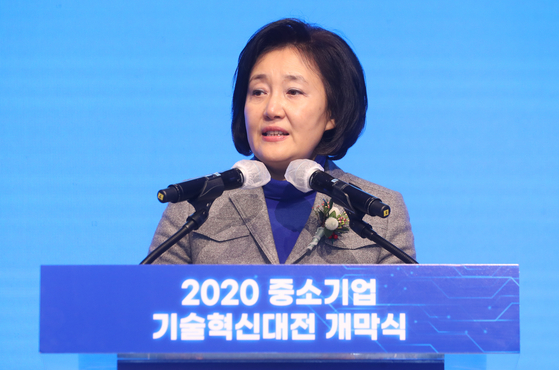 In this file photo, SMEs and Startup Minister Park Young-sun gives opening remarks at the 2020 Innovative Technology Show on Dec. 10, 2020.


“I will make a decision before the end of January,” Park said in an interview on MBC Radio on Wednesday. “Until now, I have put more weight on my responsibility as minister, but I started considering the possibility of running because the [ruling party’s] chances are growing worse.”

Park has been considered a contender for months. According to the WinG Korea poll, she was ranked highest among ruling party politicians to be the next Seoul mayor. She scored 18.5 percent, while Rep. Park Ju-min scored 9.6 percent and Woo 8.5 percent.

If the opposition’s unified candidate is Na, Park is the winner. She would score 40.1 percent and Na 39.8 percent, the poll showed.

Justice Minister takes on YouTubers who invaded his building