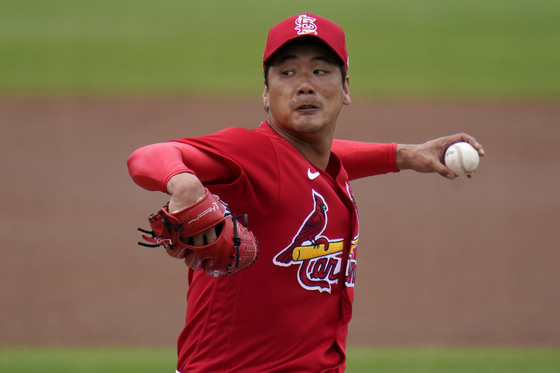 
Kim Kwang-hyun of the St. Louis Cardinals started the 2021 season on the injury list but it looks like he will soon be ready to rejoin the team, with manager Mike Shildt saying on Monday that Kim will play in a simulated game this week.

Left-handed pitcher Kim missed the start of the season after struggling with back tightness throughout spring training. After taking a week off in March, Kim looked set to rejoin the Cardinals before Opening Day, but ultimately ended up on the injured list as play began.

Speaking to press after 12-1 loss to the Cincinnati Reds on Sunday, Shildt confirmed that Kim was set to play in a simulated game in Jupiter, Florida on Tuesday this week.

Shildt reconfirmed that plan on Monday in Miami, according to Yonhap, adding that if Kim is fit he will head straight to Miami, where the Cardinals have been facing the Miami Marlins, from Jupiter to rejoin the team on Wednesday. On Thursday the Cardinals will fly to St. Louis, Missouri for their home opener of the season against the Milwaukee Brewers.

Kim missed the majority of spring training due to injury and the few games he did get to play didn't go his way.

In his debut spring training game against the New York Mets on March 3, Kim gave up four runs, three earned, in two thirds of an inning. The Korean starter did it again on March 8 against the Miami Marlins, giving up four runs in two and one third innings.

Despite the slow start, the Cardinals still have high hopes for Kim this season. He returns to the club for his second year in the majors this year after a strong debut last year that saw Kim settle into a spot in the starting rotation and earn recognition as one of the top rookies for the 2020 season.

Kim finished the 2020 season with three wins and no losses with a 1.62 ERA in eight games. He recorded seven starts after initially starting the season as a closer.

The Cardinals got off to a rough start without Kim this season, losing two of their first four games and giving up a total of 28 runs. The Cardinals are currently third in the National League Central with two wins and two losses, behind the Cincinnati Reds and the Chicago Cubs.