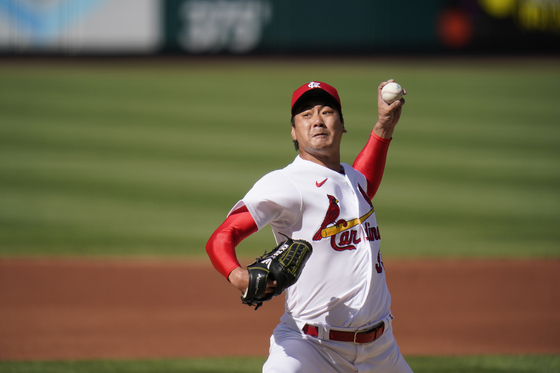 
Kim Kwang-hyun of the St. Louis Cardinals extended his undefeated run with after another strong outing on Wednesday, walking away with a no decision after a truncated fourth inning saw him pulled from the mound early.

Kim started in the first game of a double-header against the New York Mets, throwing four innings with two hits, one earned run, three walks and a strikeout. Despite just the one earned run, Kim was pulled from the mound at the bottom of the fourth for a pinch hitter. The Cardinals went on to beat the Mets 4-1.

Kim looked a little shaky to start things off at Busch Stadium in St. Louis, Missouri, allowing both a single and a walk in the first inning before rallying to shut down the Mets with a quick pop out and a groundout.

The southpaw looked more comfortable in the second inning, retiring the side on seven pitches with a flyout and two groundouts. The third was more of the same, with the Mets quickly going down in order.

The top of the fourth was a different story, with Kim giving up a walk followed by a single and another walk to load the bases. After the single, catcher Andrew Knizner visited the mound to talk to Kim, with a little assistance from Kim's interpreter.

This visit caused a lot of confusion a few minutes later, when Kim gave up the second walk to load the bases and pitching coach Mike Maddux attempted to visit the mound. Maddux was stopped at the sideline with the umpires arguing that the interpreter going to the mound earlier in the game constituted a coach entering the field — if a coach enters twice, the pitcher has to leave.

The back and forth over whether an interpreter constitutes a coach went on for some time, with the umpires ultimately calling New York for advice. In the end, the visit was permitted and Kim stayed in the game, but that wasn't the only delay to the inning.

Knizer was later hit by a foul tip and had to be checked by medical staff, and a video review was triggered when the Cardinals successfully challenged a safe call on an out at third base.

When the fourth was finally over, Kim was pulled for a pinch hitter and taken out of the game. The second-year starter didn't appear pleased with the decision.

"I still had some gas left in my tank at that moment," Kim said in a postgame interview. "I think I was lifted because I'd thrown too many pitches in the fourth. I am disappointed I didn't go deeper into the game."

Kim, who is used to playing in Korea where early summer games are regularly and persistently interrupted by monsoon rains, said he didn't think the fourth inning delays were an issue.

"I've been in situations where the game stopped in the middle of an inning because of rains and where there were multiple replay reviews," he said. "So I tried not to think too much about what was going on."