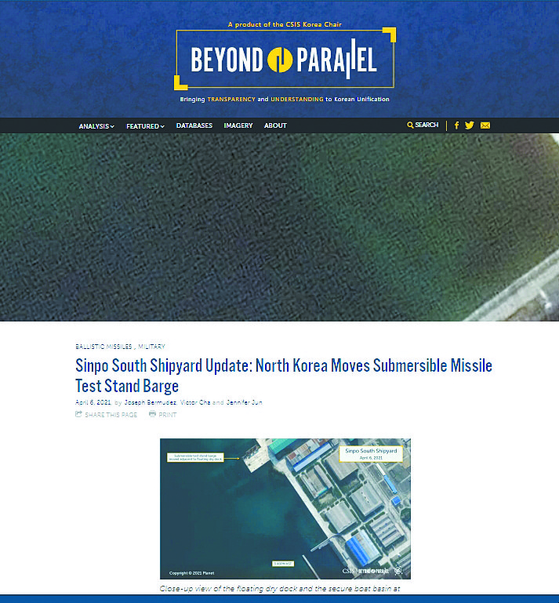 A satellite image from Tuesday shows the submersible barge at the Sinpo South Shipyard has been moved from the boat basin to the floating dry dock. [BEYOND PARALLEL]


Satellite imagery from Tuesday shows that North Korea has moved a submersible missile test stand barge at a naval shipyard on its east coast, a U.S. think tank said Wednesday.

The change could imply a step towards a submarine-launched ballistic missile (SLBM) test or maintenance or installation of equipment.

Beyond Parallel, a North Korea analysis project of the Washington-based Center for Strategic and International Studies (CSIS), suggested the absence of a visible missile canister onboard the submersible barge indicated that an SLBM test was not imminent.

However, the think tank suggested the movement of the test stand barge, along with the “implied threat” of renewed SLBM testing, would present “significant challenges” to the U.S. Joe Biden administration and the South Korean Moon Jae-in administration.

The satellite images from Tuesday show that the submersible barge located at the North's Sinpo South Shipyard has left the secure boat basin for the floating drydock.

The submersible barge has not been observed outside of the secure boat basin for an event other than at-sea testing of the North’s SLBM Pukguksong-1.

Although SLBMs have appeared regularly at the North’s military’s parades, with the last being the Pukguksong-5 which Pyongyang unveiled in January, U.S. intelligence authorities captured images of an SLBM under development for the first time at Sinpo Shipyard in September.

The images of the barge’s relocation come only two weeks after commercial satellites captured unusual movement at the same Sinpo South Shipyard, first reported March 26 by U.S.-based North Korea analysis group 38 North, which showed that a floating drydock normally moored at a pier at Sinpo Shipyard was moved from its Feb. 10 location to a wharf equipped with submarine rollout launch rails next to a construction hall.

An SLBM launch would significantly ratchet tensions on the Korean Peninsula.

Only last month, Biden warned the North that the United States would “respond accordingly” if Pyongyang persisted with what Washington considers to be provocative actions, including ballistic missile tests.

In response, the North criticized the United States for what it perceives as infringements of its sovereignty.

“The U.S. president’s comments are a provocation and encroachment on our country’s right to self-defense,” said Ri Pyong-chol, the vice chairman of the North's Central Military Commission, in a statement issued March 27.

“If the United States continues with its thoughtless remarks without thinking of the consequences, it may be faced with something not good.”