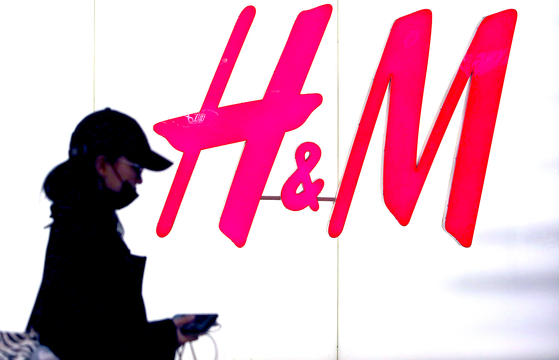 
K-pop idols of Chinese nationality are speaking out in support of Xinjiang cotton, eliciting mixed reactions from Korean fans to the politically sensitive topic.

It all began on March 22 when the United States, Britain, Canada, and the European Union imposed sanctions on four Chinese officials allegedly connected with the human rights abuses happening in China’s Xinjiang Uigur Autonomous Region. 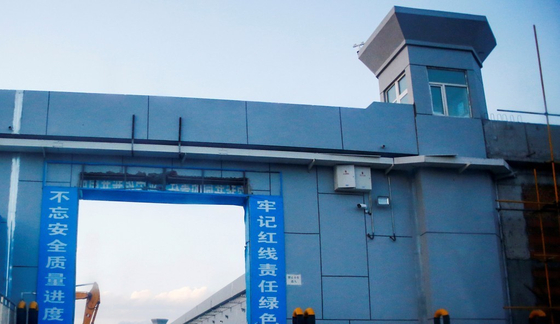 A “re-education camp" in Xinjiang. [YONHAP]


Uighurs are a predominantly Muslim, Turkic-speaking ethnic minority group, and the Chinese government has been accused of detaining at least one million of them in mass internment camps since 2017. Detained Uighurs are reportedly forced to pick cotton, along with other coerced labor, although the Chinese foreign ministry maintains that the detention centers are “re-education camps.”

The Chinese public reacted negatively to the sanctions, which they deem as Western propaganda. Two days later, the Communist Youth League of China (CYLC) brought to light a 2020 statement by Swedish multinational apparel brand H&M. H&M announced last September that it would stop buying cotton from Xinjiang due to concerns of reported forced labor in the region.

“Spreading rumors to boycott Xinjiang cotton while also wanting to make money in China? It is wishful thinking!" reads the CYLC post.

Chinese netizens soon dug up similar statements made by other apparel brands such as Nike and Adidas in the past, and announced a boycott against more than a dozen brands that stopped buying cotton from Xinjiang. 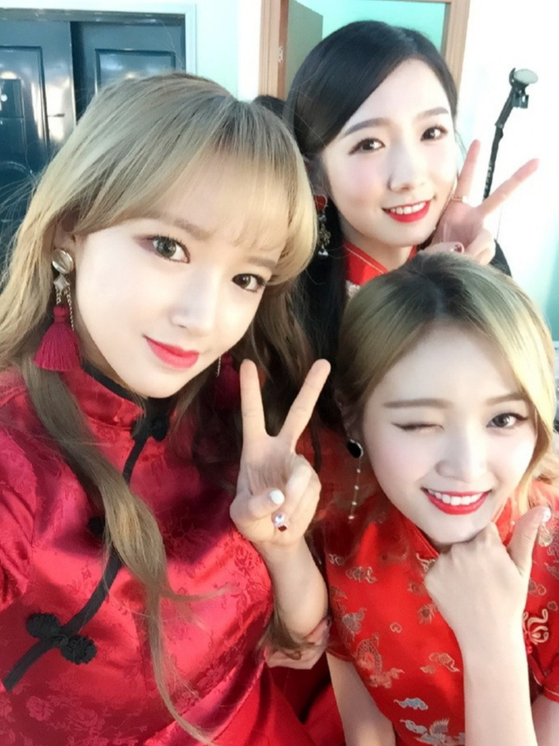 
Chinese celebrities have rushed to cancel their modelling contracts with targeted brands, including Chinese K-pop idols based in Korea.

On March 25, Meiqi and Cheng Xiao of girl group Cosmic Girls, also known as WJSN, canceled their contracts with New Balance and Tommy Hilfiger respectively, and posted on Chinese social media Weibo, along with member Xuanyi, the hashtag “I support Xinjiang Cotton.”

Lay of boy band Exo and Yiren of girl group Everglow posted the same hashtag on the same day and Lay ended his contract with Calvin Klein and Converse.

The image that always accompanies the hashtag is a parody of H&M’s logo, with the H and M rearranged to spell Mian Hua, which is Chinese for cotton. 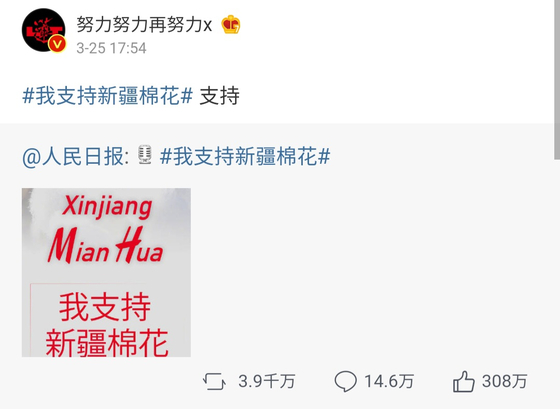 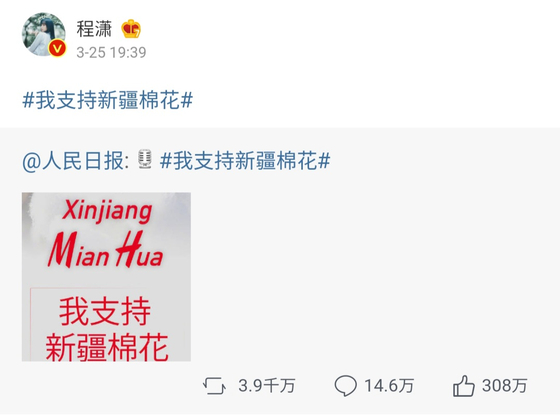 
Jackson of boy band GOT7, who is from Hong Kong, did not directly use the hashtag but announced that he would no longer work with Adidas. 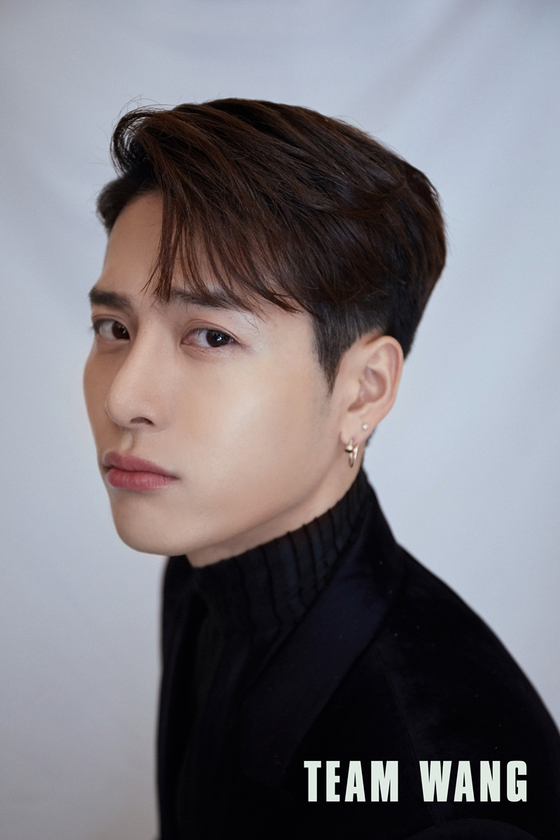 “Korea has a similar painful past during the colonial times. How can they post something like that when they’re active and making money in Korea?” “Our ancestors have been through what the Uighurs are experiencing now,” read comments under an online post which compiles a list of Chinese K-pop idols who have made controversial pro-Chinese government statements. 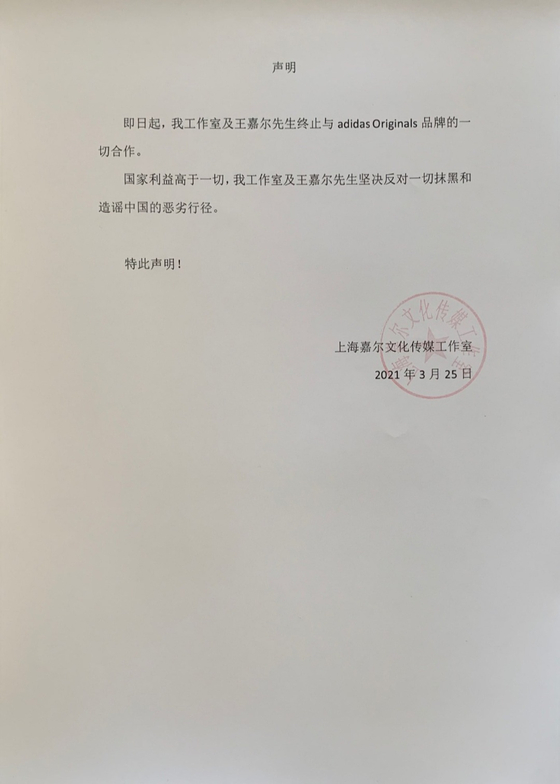 A statement from Jackson announcing that he will no longer work with fashion brand Adidas. [SCREEN CAPTURE]


“I personally hate it,” said 21-year-old Lee Sae-ryoung, who has been an avid fan of the K-pop scene for as long as she can remember.

“I wouldn’t care if they were Chinese celebrities active in China. But they are K-pop idols active in Korea, and I feel very uncomfortable when they keep making their Sinocentric stance public.”

But other comments defend the idols, assuming that they do not have a choice due to pressure from higher-ups or the Chinese public.

An anonymous interviewee who wished to be identified only by her last name Lee told the Korea JoongAng Daily that she “can sympathize” with the Chinese K-pop stars. Lee spent her entire childhood in China and attended local schools before she came back to Korea as an adult.

“I’m Korean and I live in Korea now, but I can still understand,” Lee said.

“Even if the Chinese government doesn’t directly pressure them, I’m sure the idols feel pressure. They’re Chinese after all and have to follow Chinese public opinion.” 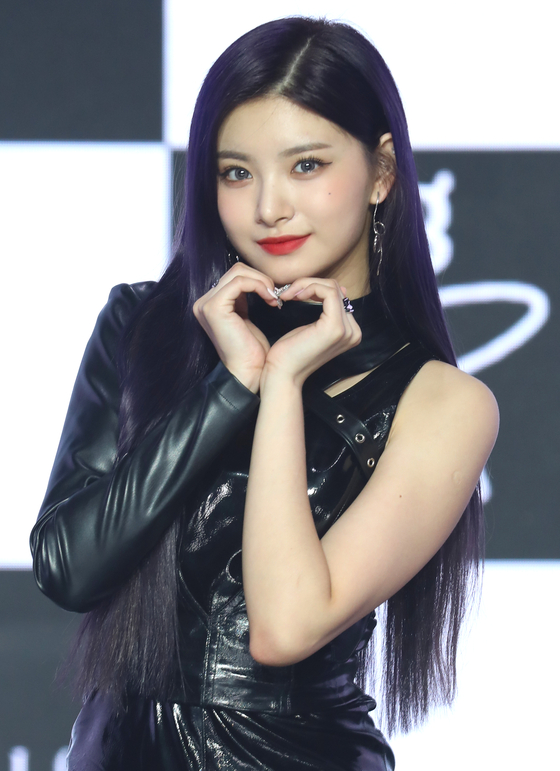 
Lee also suggested that some may not be pressured at all, and are genuinely sharing their personal beliefs.

“I think most Chinese celebrities genuinely believe what they post, because that’s what they were taught in school. Growing up, even I used to believe that Taiwan was a province of China, because all the books in China said so. So I’m not sure if I can blame them.”

“However, Chinese members face pressure from the Chinese market, which they can’t ignore because they will eventually have to go back to China. If they don’t clarify their stance, Chinese netizens may jump to conclusions that they oppose [the Chinese government’s policy].” 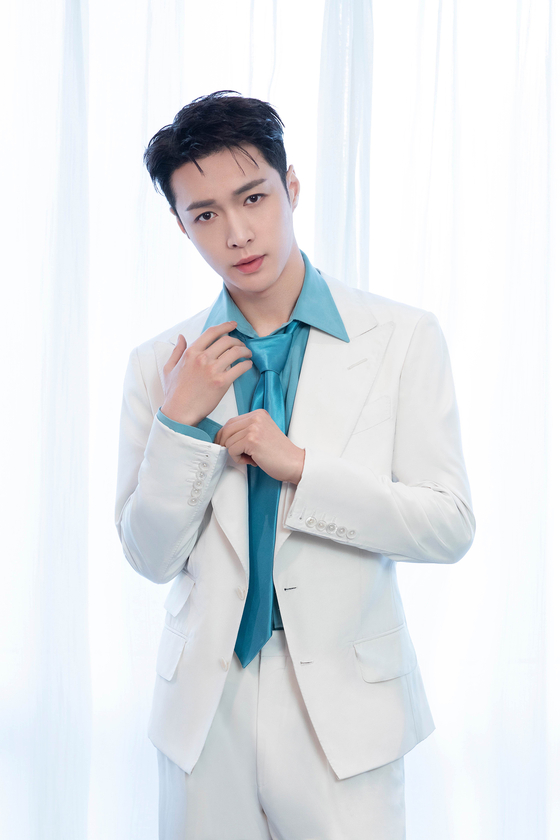 
This is hardly the first controversy of its kind. Chinese members of K-pop groups have spoken out before on issues such as the 2019–2020 Hong Kong protests, China’s claims to the South China Sea and the One China policy. Most recently, Chinese K-pop stars commemorated the 70th anniversary of the Korean War calling it the “War to Resist U.S. Aggression and Aid Korea.”

These statements were criticized at the time, but were soon forgotten. However, things may be different now that the Korean public is more sensitive than ever due to a recent surge in anti-Chinese sentiment.

“Emotions are running high. When something controversial related [to China] comes up, it gets canceled completely,” Jeong said referring to the SBS series “Joseon Exorcist” (2021) which was canceled after criticism that it misrepresented Korean culture by featuring Chinese elements.

“But there’s a better way than canceling. Korean fans should actively tell the Chinese member why they found such statement inappropriate and wrong. There should also be an internal dialogue within the K-pop groups with multinational members.”

If feedback does not work, Jeong says it should “boil down to the consumers’ choices” rather than a public outcry against the idol in question.

“Creating a coercive atmosphere telling people to boycott the idol, or telling Korean entertainment firms to stop debuting Chinese members at all is not good. If Korean fans don’t like what the Chinese members are saying, they should stop being a fan.”

Labo-H puts focus on the importance of scalp care