Ambassador of Rwanda to Korea, Dalila Yasmin Amri Sued, hosts a commemoration to remember the genocide against the Tutsi in Rwanda in 1994 virtually at the embassy on Wednesday. [EMBASSY OF RWANDA IN KOREA]


The Rwandan community in Korea, with members of the diplomatic corps and Korea’s Foreign Ministry, took time together to remember the lives lost during the genocide against the Tutsi in Rwanda 27 years ago.

"Twenty-seven years ago, our country experienced its darkest days. On the 7th of April, 1994, the genocide against the Tutsi began. For a period of a hundred days, the world witnessed the horrible killing of over a million innocent lives,” said Dalila Yasmin Amri Sued, ambassador of Rwanda to Korea, in hosting a commemorative event online on Wednesday.

On April 7 every year, Rwandans mark the 1994 genocide against the Tutsi in Rwanda that tore the African nation apart and took around a million lives in the span of three months.

Ambassador Amri Sued emphasized that the genocide against the Tutsi was not an event of just one year, but that there were numerous signs pointing to it in the years preceding 1994.

“Before the 1994 genocide against the Tutsi, thousands of Tutsi were killed in specific areas and times, as it was done in 1959, 1963, 1967, 1973 and 1992,” she said. “Newspapers and radios were reinforcing the understanding that the common goal was their total elimination. In 1994, the genocidal government, high officials from the central government and local leaders led a high participation of ordinary citizens into killing fellow citizens.”

With more than 60 percent of the population in Rwanda now born after the genocide against the Tutsi, it is even more imperative for the nation and its people to foster unity, learn forgiveness and build the nation with hope, Amri Sued said.

Kim Gunn, deputy minister for political affairs at Korea's Ministry of Foreign Affairs, who joined the event virtually, emphasized unity worldwide against discrimination based on race, ethnicity and other differences.

“It is time that we reaffirm our commitment to preventing such atrocities from happening again,” Kim said. “It is troubling to see the rising hatred and violence. We hear nowadays Black Lives Matter, we see hate crimes against Asians. What we commemorate today presents us with an opportunity to stand together, raise our voices against hatred, racism, xenophobia and all kinds of discriminations.” 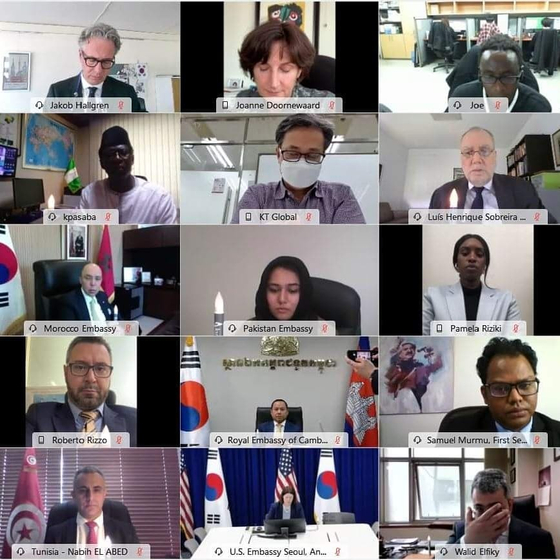 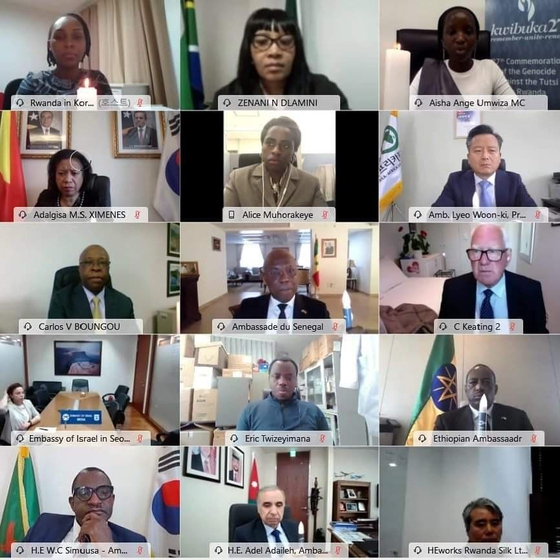 Members of the diplomatic corps join the Kwibuka 27, the commemoration to remember the lives lost during the genocide against the Tutsi in Rwanda in 1994, hosted by the Embassy of Rwanda in Korea on Wednesday. Kwibuka means to remember in Kinyarwanda, an official language of Rwanda. [EMBASSY OF RWANDA IN KOREA]


The event was joined virtually by members of the diplomatic corps, including 42 ambassadors in Korea, and also by Colin Keating, the former New Zealand ambassador who was president of the UN Security Council at the time of the genocide against the Tutsi in Rwanda. Keating had issued an apology in 2014 for the council’s failure to recognize and stop the genocide at the time.


“The remarks of Ambassador Colin Keating emphasize our common responsibility to prevent and ensure that this never happens again,” Amri Sued said. “We will always be grateful for you and your colleagues from the Czech Republic and the Federal Republic of Nigeria for standing up at the UN during those dark times in 1994.”

“The past has shaped us; but we turn to the future with hopeful eyes,” Amri Sued said. “Scars may still be visible, but today Rwandans understand the work that lies ahead and are committed more than ever to see it come to fruition.”