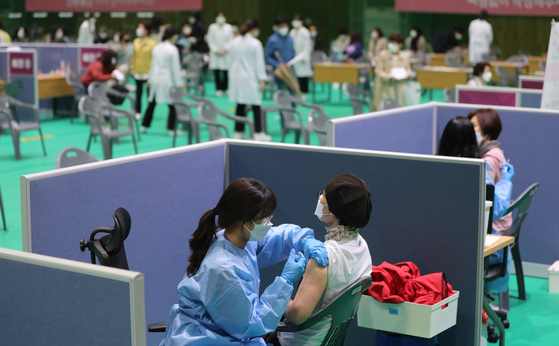 People get AstraZeneca shots at a vaccination center in Gwangju, as the rollout of the temporarily-suspended AstraZeneca vaccines resumed Monday. [YONHAP]

“I can confidently say that Korea is significantly lowering the uncertainty of vaccine supplies by efforts and countermeasures in many ways,” Moon said during a Covid-19 emergency meeting Monday.

President Moon convened the emergency meeting at the Blue House as the country is teetering on the edge of a fourth wave of the pandemic, with a daily average of new coronavirus cases topping more than 600.

Moon said the country has eased concerns by securing a foundation for stable vaccine production, citing the Novavax vaccine for which SK Bioscience signed a technology transfer contract.

“The Novavax vaccine will be produced in Korea starting this month, and we secured the raw materials for the vaccine in the first half of the year,” said Moon.

"The complete product of the Novavax vaccine will come out from June, and 20 million doses will be supplied by the third quarter," Moon said.

Novavax was previously scheduled to be introduced earlier in the second quarter, but got delayed.

President Moon ordered authorities secure additional vaccines, and asked for cooperation between all administrative and diplomatic forces to resolve the remaining uncertainties.

Moon reiterated not only the goal of achieving herd immunity by November, but also mentioned the possibility of reaching that goal faster than originally planned.

“We should also hasten to secure vaccines for any virus mutations and for the next year and after,” Moon added.

Moon also asked for the public’s participation in the resumed vaccination campaign, after the government temporarily suspended AstraZeneca jabs for people under 60 due to a possible link with blood clots.

“The vaccination policy has been decided on in respect to expert opinions based on scientific facts and priority on safety,” said Moon, and added, “Vaccine is based on science.”

Meanwhile, Moon warned that raising the social distancing level will be inevitable if the country fails to contain the current coronavirus pandemic and called for expanded pre-emptive testing and vaccine supplies.

"The state is in a risky situation that could lead to an explosive pandemic if we let our guards down,” said Moon. “The government would have no other choice but to raise the social distancing level despite the burden on people’s livelihood and the economy if [the coronavirus] is not brought under control.

Moon emphasized finding asymptomatic people who are spreading the virus around, ordering the expansion of test taking and pre-emptive tests as much as possible.

Moon stressed that the government will take a “zero-tolerance policy” towards violations of social distancing rules, and added that following measures properly has the same effect as raising the social distancing alert.

Moon also called for cooperation with the new mayors, as the recently-elected Seoul Mayor Oh Se-hoon is seeking flexibility on social distancing measures in the capital.

It is the first time in four months since Dec. 9 last year that Moon convened a meeting to check on the coronavirus situation himself. At that time as well, the daily new Covid-19 cases hovered around 600. 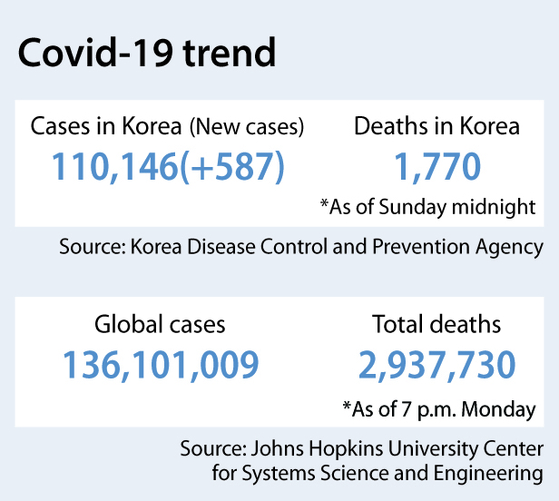 As of Sunday midnight, Korea reported 587 daily new coronavirus cases, falling back below 600 for the first time in six days. However, the decrease can most likely be attributed to fewer tests conducted over the weekend.

This is still over 100 cases more compared to the previous Monday's 473.

One-hundred and sixty cases were from Seoul, 173 from Gyeonggi, and 12 from Incheon.

Outside of the capital area, Busan reported the most cases with 46, followed by Ulsan with 31, North Jeolla with 24 and Daejeon and Northern Chungcheong with 17 each.

Two more deaths were reported, bringing the death toll to 1,770.