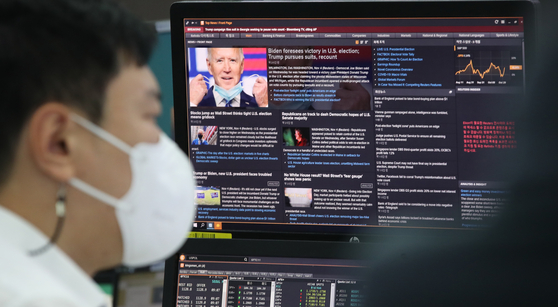 
While counting continued in the cliffhanger U.S. presidential election, the Korean stock market rallied, closing 56.47 points or 2.4 percent higher than the previous day.

The Kospi has been upbeat for the last four consecutive trading days, gaining 146.64 points this month alone, or 6.5 percent.

The Korean government said despite uncertainties from the U.S. election, its impact on the local financial markets has been limited.

“There were opinions that an increase in volatility in our financial markets was inevitable considering the resurgence of Covid-19 in Europe and the United States as well as the uncertainties of the U.S. election,” said Vice Finance Minister Kim Yong-beom during a government meeting assessing the economic situation on Thursday.

“[However,] the risks regarding the U.S. election have mostly been reflected in our financial markets,” Kim said. “As the United States is largely expected to maintain its frame of loose monetary and fiscal policies [regardless of who wins], the possibility of volatility in our financial and foreign exchange markets increasing is likely to be limited.”

He added that the government will continue to monitor the situation while remaining alert to the possibility of uncertainty in the U.S. continuing.

“And once the U.S. election results are confirmed, we will move swiftly according to changes in U.S. policies and the impact that follows,” Kim said.

While a re-election of U.S. President Donald Trump was predicted to have a positive impact on the stock market, any resolution of the political turmoil will be welcome.

Even with a Joe Biden victory, the market is unlikely to change its current course, especially because the former vice president won’t be able to strongly hike taxes amid the economic struggle caused by the coronavirus pandemic.

“The immediate focus will be on fiscal expansion and economic stimulus [due to Covid-19],” said Kim Soo-yeon, a Hanwha Investment & Securities analyst. “Tax hikes will likely come two years after.”

Industries that are expected to benefit if Biden wins are renewable energy, including solar cells, wind generators and even hydrogen technologies.

Steel companies such as Dongkuk S&C are expected to benefit from wind power development, while Doosan Fuel Cell, which specializes in hydrogen-powered generators, is also expected to enjoy positive growth.

Another area that could benefit is electric vehicle batteries, including leading manufacturers LG Chem, SK Innovation and Samsung SDI.

Shares of these battery companies have been enjoying strong growth recently.

On Thursday, LG Chem closed 4.15 percent higher. When compared to the end of October, the battery maker’s stock value was up 10 percent.

SK Innovation was up 4.55 percent Thursday. This month, its share price has gone up 10 percent.

Samsung SDI rose 5.33 percent on Thursday and 9.5 percent this month.

As Biden has shown a strong interest in health care, companies in that industry in Korea are expected to see an upswing, including drug developers Celltrion and Samsung Biologics.

Another key issue is Washington's relations with Beijing. Trump has been engaged in a trade war with China and banned the use of Chinese tech products from Huawei.

“One thing that won’t change in the Biden administration will be the U.S.-China battle for power that was launched by the Trump administration,” said Juhn Jong-kyu, a Samsung Securities analyst.

In the mid- to long-term, the United States will continue to pressure China over intellectual property violations and high-tech issues, he said.

IT companies such as Naver could be affected if the Biden government tightens antitrust regulations against major IT companies.

However, if Trump succeeds in getting re-elected, major heavy industries including refineries, petrochemical companies as well as IT and finance are expected to benefit.

US Election Kospi Impact on Korea