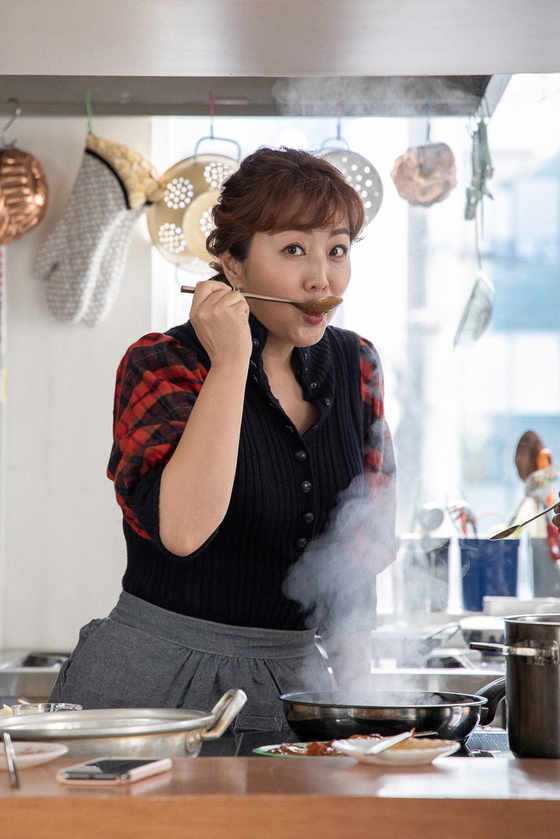 
Chef Hong Shin-ae of restaurant Salt is a firm believer that life is about experiences. Hong wants to taste everything delicious the world has to offer and wants the same for everyone else too.

“I’m scared I might not be able to eat everything good before I die,” said Hong. “And once I taste something really good, I’m inspired to recreate it on my own.”

The food she's currently focusing on recreating is the Korean staple kimchi. While most would assume Koreans know their kimchi, Hong thinks otherwise. With more choices of packaged kimchi made readily available on the shelves of supermarkets, she says surprisingly a large number of people have never made kimchi with their own hands. To bring the kimchi-making experience to the masses, Hong has come up with a kimchi kit, which will allow you to have your very own with just 10 to 20 minutes of prep.

“Ironically, the people who were never patient enough to wait about two to three weeks until kimchi is properly fermented or aged for fuller flavors now don’t mind waiting because this is kimchi they've made with their own hands,” said Hong. Hong has been offering the kimchi-making kit since last month, allowing people to enjoy the full flavor of fermented kimchi even a day after it is made.

“This is why it is so important for people to actually experience cooking,” she said. “We just feel something more than when we're eating something we are simply served.” 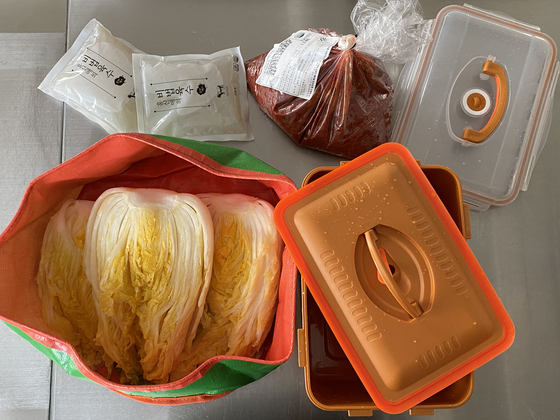 
Hong has been interested in food for as long as she can remember. As an elementary school student she would collect change to buy tteokbokki (spicy rice cakes). She was so curious about certain tteokbokki eateries that she would take different bus routes home after school so she could try new spots. She had to plan these trips carefully to avoid being caught by her mom who strictly forbade her from getting tteokbokki, which some consider a junk food. Her passion for tteokbokki even led her to publish a book, her eleventh, in the last year.

She would watch the process of the tteokbokki being prepared and try to recreate it at home. If her parents took her to a restaurant and she tried a new dish she loved, she would try and figure out the recipe herself and mimic the dish at home. When her mom gave her about 800,000 won ($750) right before she entered middle school, she blew it all on an oven so she could bake madeleines after trying some at a local bakery.

“I was just very focused on my basic instinct,” she said. “When I set my mind on something I want to do, I would always take action.”

That instinct paired well with her passion for food. While she was in the United States pursing a career in music, she ended up focusing more on cooking food to share with her neighbors and posting the recipes online. The content she posted went viral and she began earning recognition as a culinary expert.

Hong opened her first café in Seoul in 2006 and now works as a chef at her restaurant full-time. She’s also been sharing her culinary knowledge with the general public through a variety of appearances on entertainment shows that deal with food.

In order to be a frontrunner of the next food trends to hit Korea, Hong has been studying the culinary records from centuries ago to try and figure out what those trends could be.

“It's because what we know as food culture is made with every little thing that happens during a certain time period,” said Hong, explaining why she studies old books that record not only the details of daily meals, but also party food for special events.

“Books from the Joseon era (1392-1910) even have records of how they used food carriages when the king was on a trip outside the palace for weeks, and how all kinds of ingredients from the other end of the country were delivered fresh even under extreme weather circumstances. Such records can help me get tips on what business I should consider doing next.”


Q. Why did you decide to make kimchi-making kits now?
A. Very frankly speaking, to sell more of my kimchi. To make that happen people need to understand what kimchi is.


Are you saying Koreans, who tend to eat kimchi very regularly, don't actually know what it is?
You would be surprised to know how little people understand kimchi and the process to make it. People say kimchi has lots of benefits that come from its fermentation process, but in fact many eat kimchi that is not properly aged. These days, people just buy kimchi made in bulk from their nearest retailer. And so many of them have never got their hands dirty actually making their own. They seem to not remember the fact that kimchi is supposed to be aged for some time. With the kimchi I made and sold before, I told people to put it in the refrigerator and wait about 21 days but no modern day person has the patience to wait that long. They just want kimchi right away when they want to eat some. 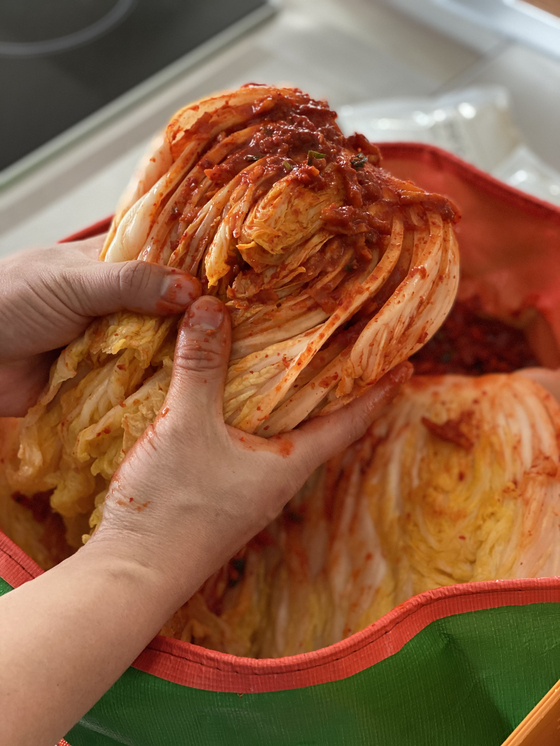 Making your own kimchi takes about 20 minutes when using the kit by Hong Shin-ae. [HONG SHIN-AE]


If people don’t care about making kimchi from scratch or waiting for it, why do you think they would choose to buy the kits?
I get a lot of feedback from people in their 30s and 40s that they've used my kits to make kimchi for the first time. I believe people just have not had a chance to try making it in an easy way. This kit has everything ready inside so that you don’t need to use any of your own dishes or utensils at home. You get the gist of kimchi making, adding the spicy paste onto each layer of Korean cabbage, without having to invest any time into preparing the ingredients. It really only takes 10 to 20 minutes to do. You get the satisfaction of making kimchi without investing too much time. And for some, it is also an educational tool and toy for their children.

Do you think others are likely to copy your kimchi kit idea?
I really want someone to copy this idea and expand it. They might be surprised how high the cost to make such kits is, but still, I want more people to find their own way to make quality kimchi-making kits so that more consumers will get a chance to be exposed to the process.

Have you thought about offering the kits to overseas customers?
I think there could be a way to do that. I lived in the United States for some time, and I know that there are some factories that could distribute salted cabbages. If it weren’t for the pandemic, I would have already visited a handful of facilities in the United State to see if the kit could be mass produced. But there’s little I can do for now from Korea. I’m in the early stages of talks with a company in Singapore about delivering the complete kit made here to consumers there. I really do want to bring the idea overseas, and I’m looking for any opportunities I can grab. 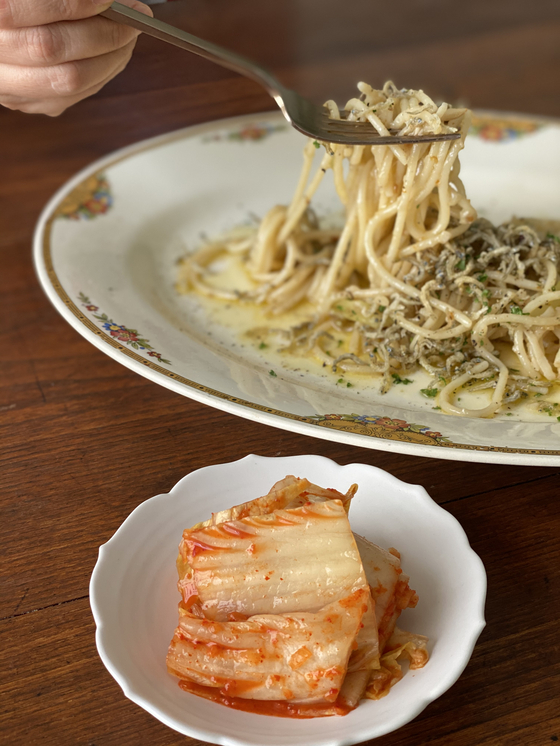 Kimchi is served with pasta at Salt. [HONG SHIN-AE]


Locals often look for pickled vegetables when dining at Western restaurants. Why did you decide to offer kimchi at your restaurant instead of pickles?
People want something refreshing, but many of the pickled dishes they get at restaurants are almost too sweet. I also saw a big demand for such pickles so I offered pickled jalapenos before but they totally overpower any subtle flavors. So I tried giving them something crispy. I tried frying lotus flower roots, made burdock jangajji (picked burdock strips) or pickling beet slices. Maybe the taste was just too healthy, people didn’t really reach for them. Since I opened Salt the second branch, I started to tell diners that we don’t have pickles but offered them kimchi instead. And 90 percent, I hear cheers. People just raved about the idea of getting kimchi as a side with their meal.

Why do you continue writing books?
So far I have 11 books. I previously had a goal that I would publish one book a year, but I haven't done that because I have been cooking for about 17 years. I realize the only place I can record my cooking diary is Instagram. I use that platform to remember what I cooked. When I look at a photo, I remember what bad things happened that day and how I screwed up cooking certain things, for example. I’m not trying to deliver some message through my books. I just want to have records of what I've done. Books are the reflection of my cooking. The next one I’m preparing celebrates the 10 years that Salt has been in operation. 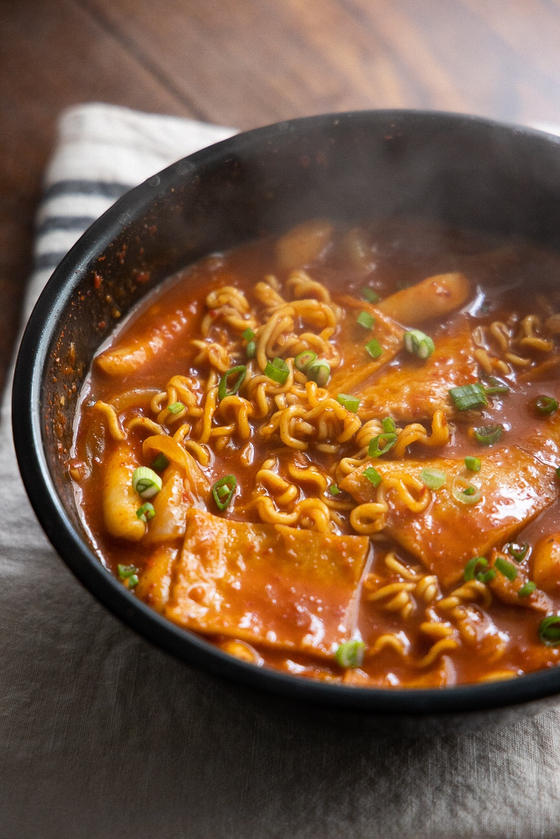 Spicy tteokbokki made by Hong Shin-ae of Salt. [HONG SHIN-AE]


Why do you think so many consider tteokbokki soul food?
I think that it’s probably the first thing people bought with their own money. It is the very first economic activity many would have had. It is the spending many young kids choose to do in exchange for the small sum of money they make from doing chores. That’s how I remember it and I think that’s why it’s meaningful for me and it’s meaningful for many others. And people have seen how it’s made over and over again as they wait for their food to come out. So it’s easy for them to just make some for themselves at home that fits their style. Flavor-wise, I think people like the dish because it is sweet. To maximize the sweetness in it, we add salt and we add spices. In tteokbokki, tteok (rice cake) might be just playing a supporting role. The main player is the sweet flavor.

What plans to you currently have?
I want to be able to cook until I’m in my 80s. As you get older, there are more things you can do with the knowledge you have picked up. One thing I would like to do is a culinary lodging project. I think in the future, restaurants will become the destinations themselves. And people will need a place to stay to eat at a particular restaurant. Just like I provided everything so that people can just add the final touch in the kimchi-making process, I’m going to do something similar with this project. I want people to feel like they are eating the food they've grown out in the field, simply by harvesting some ingredients with their own hands. I’m working with Awon Museum and Hotel in North Jeolla to test run the idea. Overnight guests there will get a total six meals and snacks including late night snacks and afternoon teas during their two-day stay. And internationally, I would love to open a Korean restaurant in Portugal. Talks were about to begin but then the pandemic started. I hope I get another chance soon.