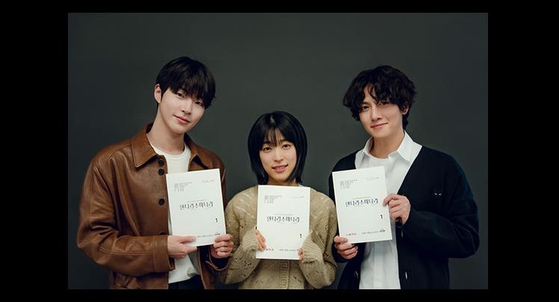 From left, actors Hwang In-hyup, Choi Sung-eun and Ji Chang-wook pose for a photo holding up scripts for the adaptation of webtoon "Annarasumanara," which will be released worldwide on Netflix. [NETFLIX]

Written and drawn by cartoonist Ha Il-kwon, the story revolves around a girl who wants to become an adult and a mysterious, childlike magician who performs magic at an abandoned amusement park.

Actors Ji Chang-wook and Choi Sung-eun will star as the magician and the girl.

Producer Kim Sung-yoon behind television series “Moonlight Drawn by the Clouds” on KBS and “Itaewon Class” on JTBC will take the helm of the series and writer Kim Min-jung behind “Moonlight” wrote the script.

JTBC Studio and Zium Content will be producing the series and it will be made available on Netflix in 190 countries worldwide. The release date has not been set.