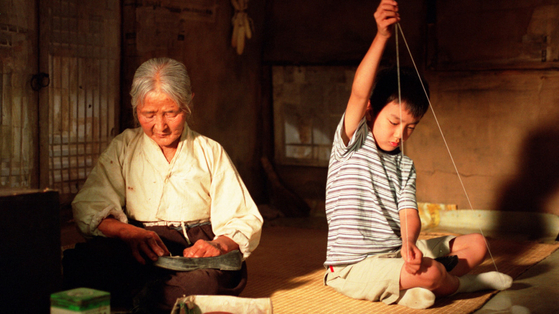 A scene from the 2002 film ″The Way Home″ which shows Kim Eul-boon, left, playing the role of the mute grandmother in the remote countryside, and Yoo Seung-ho playing her grandson from a metropolitan city. [CJ ENTERTAINMENT]

The family of Kim announced Sunday that she passed away. “If those who remember Grandma [Eul-boon] cherish the memory of her, we would appreciate it,” the family said in a statement.

“The Way Home,” directed by Lee Jeong-hyang, is a heartwarming drama about a spoiled city child and his mute grandmother living in the remote countryside, who temporarily takes care of the child. Kim, then 76, took the role of the grandmother, while star actor Yoo Seung-ho, then nine years old, played the grandson.

Kim, found by director Lee among the villagers of the North Chungcheong countryside where “The Way Home” was filmed, had never before performed in a movie and never even watched a film. However, in part helped by her natural acting skills, “The Way Home” was an unexpected hit success, attracting more than 4 million viewers and winning Best Film and Best Screenplay awards at the 2002 Grand Bell Awards, one of Korea’s major film awards. Kim was nominated for the Best New Actress award and gained nationwide popularity.

Feeling pressured from the unexpected popularity and fame, Kim left her home in North Chungcheong to live with her family in Seoul. She never appeared in a film again. “Still, she was always happy when she remembered ‘The Way Home.’ She cherished the film as a happy memory,” a family member told News1 Korea.