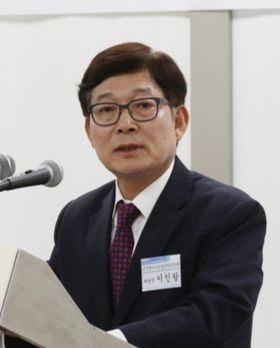 Lee In-lam, chairman of the Presidential Truth Commission on Deaths in the Military, announced his resignation on Tuesday over the commission's controversial decision to reopen a probe into the sinking of the Navy corvette Cheonan before it backpedaled over outrage from survivors and their families.

In a press release, Lee said, "I sincerely apologize for causing great pain and hurt to the bereaved families and surviving soldiers of the Cheonan incident.

"Although the commission worked to follow the law and regulations, we didn't consider the perspectives of the bereaved families."

Lee's resignation comes after National Assembly representatives from the opposition People Power Party revealed Sunday that leading commission members approved a petition demanding another investigation into the ship's sinking and directed commission officials to "probe and verify" claims that the accident was caused by the ship running aground.

The theory that the Cheonan sank due to an underwater collision has been touted repeatedly by Shin Sang-cheol, a former member of the South Korean-led multinational Joint Civilian-Military Investigation Group (JIG) which looked into the sinking.

The JIG issued a summary of its findings in May 2010, coming to the conclusion that the Cheonan sank due to a non-contact underwater explosion caused by a North Korean torpedo detonating close enough to the stern section of the hull to cause severe damage. The conclusion led the administration of then-President Lee Myung-bak to impose economic sanctions on the North in the same month.

However, the JIG’s findings have been questioned by pundits such as Shin, who argue that the conservative administration blamed North Korea for political purposes.

Shin, who was sued for libel by the JIG for making such claims, filed a petition to the commission for another probe last September. Although Shin’s petition was initially denied due to his lack of standing as a petitioner, Lee ordered the petition to be processed after Shin submitted a complaint by phone.

Cheonan survivors on Tuesday expressed their outrage and dismay that high-ranking members on the commission decided to open a new probe in line with a petition that aimed to exonerate North Korea’s role in the sinking.

Survivors and bereaved family members held protests in front of the Blue House, Defense Ministry and the commission’s offices on Tuesday morning. One sign read, “Dear soldiers, do not sacrifice for your country. You will be betrayed like us.”

In his resignation statement, Lee expressed his regret that the commission’s actions led to survivors feeling betrayed.

“I'm very heartbroken to hear that surviving soldiers said we failed to uphold the honor of those who serve our country and that they regretted defending the country and the people.”