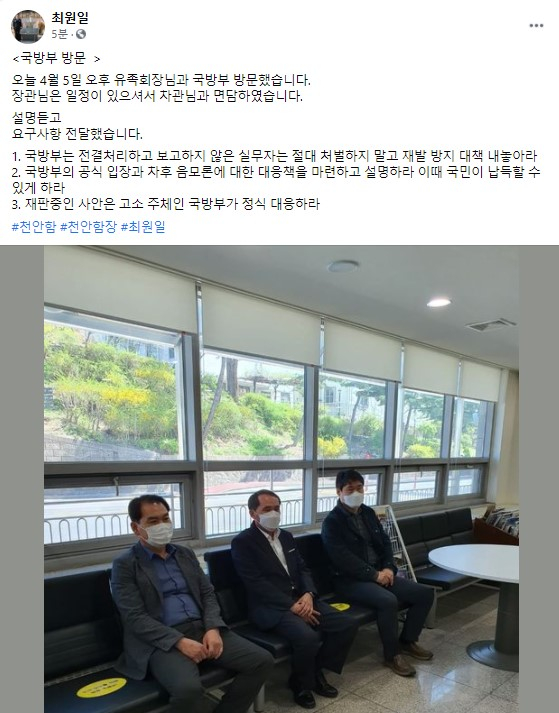 Choi Won-il, captain of the Cheonan, posted on Facebook that he visited the Defense Ministry Monday to demand countermeasures against conspiracy theories regarding the deadly sinking. [FACEBOOK]


The Presidential Truth Commission on Deaths in the Military initially rejected a petition for a reinvestigation into the sinking of the Navy corvette Cheonan before accepting it.

An anonymous source within the commission told the JoongAng Ilbo that a Sept. 7 petition for a re-inquiry from Shin Sang-cheol, a former member of the Joint Civilian-Military Investigation Group (JIG) which looked into the sinking, was denied at first because Shin did not meet the requirements as a petitioner.

According to the source, the commission reviewed Shin’s petition and mailed him an official denial. The denial was issued with a legal explanation written by the commission’s legal affairs team, saying Shin did not meet the relevant law’s requirements to qualify as a petitioner.

The source directly contradicts the commission’s explanation last Thursday that it accepted Shin’s petition because he qualified. A petition can be accepted if it is filed by witnesses or those who directly listened to the witnesses.

Shin was a member of the JIG, a South Korean-led multinational investigative group which investigated the deadly sinking of the naval corvette Cheonan on March 26, 2010. Forty-six crewmembers perished after an explosion that caused the ship to break in half in the Yellow Sea near South Korean-controlled Baengnyeong Island.

Although the JIG concluded that the ship sank due to the non-contact underwater detonation of a North Korean torpedo, Shin claimed that the Cheonan sank after running aground and that the then-conservative government manipulated the probe outcome.

According to the anonymous source, Shin’s request to re-open an inquiry was later accepted on Dec. 14 against resistance from members of the commission, even though Shin himself did not raise an objection to the initial denial.

A rejected petition normally does not proceed without the petitioner successfully filing an objection. However, Shin’s petition was taken up without further input from him.

Once the commission’s intent to reinvestigate the Cheonan sinking was revealed to the public on Wednesday, it faced severe backlash from the ship’s surviving crew and families of the fallen. One surviving crewman wrote on Facebook that he felt like “dousing himself in gasoline in front of the Blue House” in response to the news.

After holding an emergency meeting on Friday in response to the outrage, the commission decided to not reinvestigate the deadly sinking.

In a press release, the commission explained, “We judged last year that Shin met the conditions [as a petitioner]. After an in-depth review and discussions, however, we found him disqualified.”

Questions remain concerning why Shin’s petition was green-lighted after its initial rejection.

The day after the reinvestigation was canceled, the commission’s Secretary General Ko Sang-man posted a photo of a broken tree to Facebook with the caption, “How I’m feeling these days.”

Ko has previously written in support of detractors of the official conclusion of the JIG.

Ko directly supported Shin in his book, “Again, A Human” (2014), where he wrote, “Anyone equipped with scientific logic will harbor all kinds of suspicions about the sinking of the Cheonan. The person who most pointedly raised questions about the incident is Shin.”

Following the commission’s decision to drop the reinvestigation, surviving crew and families of the fallen expressed relief, but also demanded an apology, saying the commission never once consulted them before deciding to reopen a probe into the sinking.

A speedy probe is needed