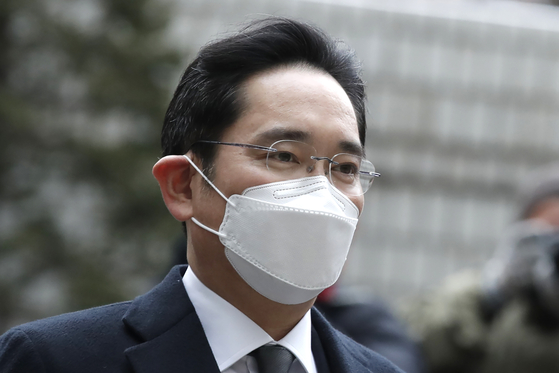 
One week after recovering from an emergency surgery, imprisoned Samsung leader Lee Jae-yong on Thursday attended a trial on accusations that he broke laws while cementing his control over the country’s largest conglomerate.

The trial took place at the Seoul Central District Court in the morning, and Lee was dressed in a dark suit and wore a white facemask. It was apparent that he had lost some weight.

“The court has taken into account Lee’s emergency and thankfully delayed the trial date,” one of Lee's lawyers said before the trial began. “Lee is recovering from the emergency health situation. We appreciate the court and prosecution’s consideration.”

Lee was indicted last September on charges of violating the country’s capital market laws. After a 21-month probe, the prosecutors concluded that Lee and other top executives had broken laws during the controversial merger of Samsung C&T and Cheil Industries in 2015. The merger strengthened Lee's control over Samsung Group after his father, Lee Kun-hee, was hospitalized in 2014 following a heart attack. He died in October 2020.

The trial was supposed to happen in January, but it was postponed to March due to the spread of Covid-19 infections. The trial was delayed further after Lee underwent an emergency surgery at Samsung Medical Center on March 19 due to a ruptured appendix and was hospitalized for three weeks.

Lee returned to the Seoul Detention Center on April 15, and the trial schedule resumed. The first session took place on Thursday, and Lee made his mandatory appearance.

The 52-year-old Samsung Electronics vice chairman has been in and out of jail over the past few years. He was first detained during an independent council probe in 2017 into the allegations that he had bribed former President Park Geun-hye through her friend Choi Soon-sil in return for political favors. After a yearlong detention, Lee was released in 2018 after an appeals court reduced his five-year jail term to a suspended sentence.

He, however, was imprisoned again on Jan. 18 this year after being sentenced to two and a half years in a retrial ordered by the Supreme Court. Since he spent nearly a year in detention, he had one year and six months left to complete his term.

In the new trial that began Thursday, Lee, through his lawyers, said no illegality was committed during the 2015 merger. They said it was a legitimate and ordinary management activity, not specifically intended to cement his control over the conglomerate.

The trial began as demands are snowballing in the political and business communities that President Moon Jae-in pardon Lee for his bribery convictions and release him from jail in order to utilize his global network of powerful politicians and businessmen in order to resolve Korea’s slow procurement of Covid-19 vaccines.

“Just like the contribution the late Lee Kun-hee had made for Korea to win the bid to host the PyongChang Winter Olympics, the global network of Lee can be used to secure vaccines,” said Chairman Sohn Kyung-shik of the Korea Enterprises Federation.

In 2009, then President Lee Myung-bak granted a special pardon to former Samsung Chairman Lee Kun-hee, accepting the business and sports communities’ request to reinstate the tycoon whose membership at the International Olympic Committee (IOC) was suspended. The move was to help Korea host its first-ever Winter Olympics in 2018.

At the time, Lee was sentenced to a suspended jail term for illegal bold dealings and tax evasion. He voluntarily rescinded his rights and duties as an IOC member, but the special pardon later restored his status.

Lee has been known for his wide connections in the global business community. He was the first ever Korean businessman to be invited to the Allen & Company Sun Valley Conference, an annual gathering of top media and tech leaders. He has attended the meeting almost every year since 2002, until his legal battle started in 2017.

He is also a board member of the Boao Forum for Asia, a Beijing-backed annual conference for thought leaders.

“It is widely known that Lee has played crucial roles in supporting Korea’s economy and diplomacy using his network of global figures,” a business community source told the JoongAng Ilbo.

When the relationship between Korea and China became rocky due to Korea’s decision to allow U.S. deployment of the Terminal High Altitude Area Defense (Thaad) missile system in 2019, Lee announced a decision to invest $8 billion in a factory in Xian, the hometown of Chinese President Xi Jinping’s father Xi Zhongxun.

The decision was largely credited to stop further escalation of tensions between the two countries.

When Japan announced tightened export regulations on materials crucial for semiconductor and display production in July 2019, Lee also visited Japan and met with industry leaders to discuss a resolution.

Politicians from both ruling and opposition parties also urged Moon to pardon Lee to take advantage of his network.

“Moon must release Lee and include him in the presidential entourage for the upcoming Korea-U.S. summit [in May],” said Kim Keun-sik, a senior strategist of the opposition People Power Party.

Rep. Ahn Gyu-bak, a four-term lawmaker of the ruling Democratic Party, also said recently in a media interview that he thinks it is "necessary to pardon Lee if it serves national interest.”

According to a poll conducted by RnSearch requested by local media outlet Dailian on Monday and Tuesday, 70 percent of respondents said they would support Moon granting a special pardon to Lee on Aug. 15 Liberation Day. Twenty-six percent said they are opposed to Lee’s pardon.