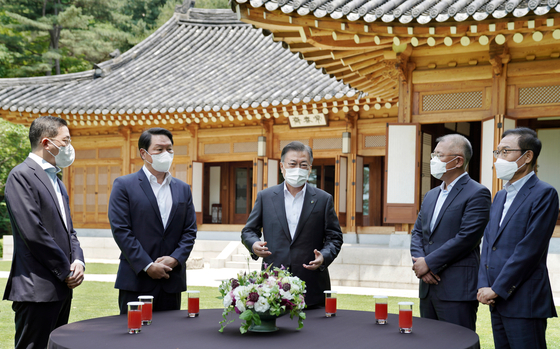 Moon invited the leaders of the country’s top four business groups to a luncheon at the Blue House to thanks them for announcements of massive investments in the United States just before his summit with U.S. President Joe Biden last month.

According to Blue House spokeswoman Park Kyung-mee, the business leaders reiterated their request that Moon issue a special pardon to Lee. “After listening to their request attentively, Moon responded that he understands the difficulty,” Park said.

A senior presidential aide said SK’s Chey asked Moon to positively consider the five major business lobbies’ recent appeal. The business groups, including the Korea Chamber of Commerce and Industry, headed by Chey, sent a joint letter to Moon in April asking him to pardon Lee to help Korea maintain its dominance in semiconductors.

“Samsung Vice Chairman Kim also said the semiconductor industry requires decisions about massive investments, and the decision-making process is only speedy when the group’s head is working,” the aide said. "Kim said such investments will create jobs."

According to the aide, another business leader who attended the luncheon asked Moon to pardon Lee because it is critical for Samsung to prepare for growing uncertainty in the economy in the next few years.

According to the aide, Moon double-checked with the leaders that they were asking him to pardon Lee.

“The president said many people agree with their request,” the source said. “Moon also said the current economic situation is unfolding differently from the past, and he understands very well that a company is required to make a bold decision.”

Lee is in jail for bribing former President Park during her presidency through her friend Choi Soon-sil. He has about 13 months left in a sentence of two and a half years.

In a press conference marking four years in office on May 10, Moon said he knew of growing demands that Lee be pardoned, but had to think about the fairness issues, cases in the past and public sentiment.

"A pardon is a president's prerogative, but I don't think I can make the decision as I like," he said at the time. "I will seriously consider the people's opinions and make a decision."

Over the past weeks, various opinion polls showed that about 70 percent of respondents want Moon to pardon Lee.

Speculation is growing that Lee will be pardoned in August. When the five business lobbies sent their appeal in April, a presidential source said the Blue House had no plan to consider it. That stance has visibly softened in recent weeks.

Sources close to the administration told the JoongAng Ilbo last month that Lee could be granted a presidential pardon on Aug. 15, Liberation Day. It is a tradition for presidents to grant pardons on major political anniversaries such as Liberation Day.

Despite traditional rivalry among the groups, Lee and the heads of SK, LG and Hyundai Motor groups have maintained a close relationship. The four tycoons met last September, and again in November and December.

The meetings stopped after Lee was sent back to prison in January to complete his term.

At the luncheon, Moon thanked the tycoons for decisions to invest a total of $40 billion in the United States. “Because the four largest groups came along with me on my visit to the United States, the summit had a great outcome,” Moon was quoted as saying by spokeswoman Park.