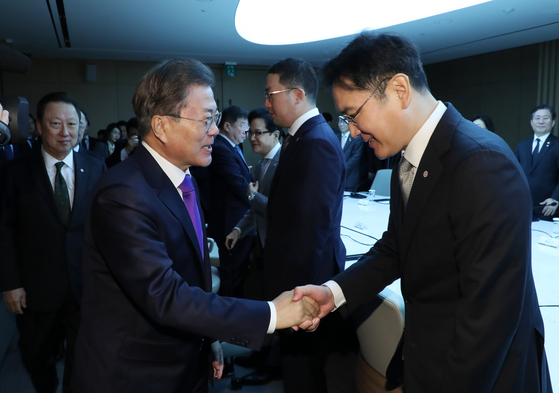 
The Blue House and ruling party are actively considering a pardon for Samsung leader Lee Jae-yong, who is serving time for bribing the former president.

Sources close to the administration told the JoongAng Ilbo on Friday that Samsung Electronics Vice Chairman Lee could be granted a presidential pardon on Aug. 15, Liberation Day. It is a tradition for presidents to grants pardons on major political anniversaries, such as Liberation Day.

“Moon said [during a press conference on May 10] that he will listen to various opinions on the issue of pardons for two former presidents and Lee,” said a source informed about Blue House affairs. “Moon is currently gathering opinions through various channels."

Lee is in jail for bribing President Park Geun-hye through her friend Choi Soon-sil. He has 15 months left in a sentence of two and a half years.

Over recent weeks, public opinion polls showed growing support for a Lee pardon.  According to a poll by weekly magazine Sisa Journal, 76 percent of respondents said they support a Lee pardon. Only 21.9 percent opposed a presidential pardon.

The survey was conducted on May 11, one day after Moon said at a press conference that public sentiment would be a key factor in his decision. That was a shift from the Blue House’s earlier position that it was not considering a pardon for Lee.

When five major business lobbying groups formally petitioned Moon last month for a pardon, a senior presidential aide said the Blue House was not considering it and had no plan to do so. 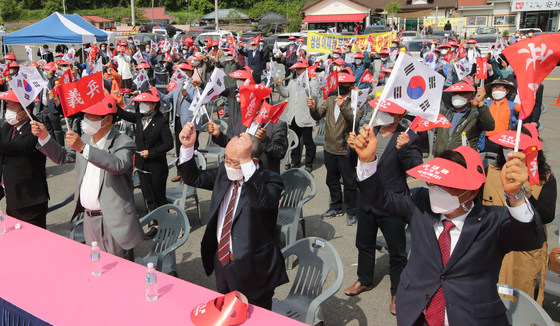 About 100 residents of Euryeong, South Gyeongsang, hometown of Samsung's late founder Lee Byung-chul, hold a rally on May 12 near Lee's birth place to pressure President Moon Jae-in to pardon Lee Jae-yong, who is a grandson of the late Lee. [Song Bong-geun]

In a joint survey by four polling companies including Hankook Resaerch conducted during the second week of May, 64 percent of respondents said they wanted Lee to be pardoned, while 27 percent opposed the idea.

Over the past weeks, religious leaders and politicians from both the ruling and opposition parties have urged Moon to free Lee for the sake of maintaining Korea’s dominance in the global semiconductor market.

The ruling Democratic Party (DP) has maintained a position that granting pardons is a presidential prerogative that the party has no control over. But its lawmakers are increasingly pressing Moon to pardon Lee.

Chairman Song Young-gil created special committees on Covid-19 vaccines and semiconductors within the party. Both are key businesses of Samsung Group, and they are also important issues for Moon’s summit with U.S. President Joe Biden on May 21.

“Samsung’s semiconductors are being used as a leverage in the summit, and a discussion is ongoing between the two countries to produce vaccines at Samsung facilities,” a senior DP lawmaker told the JoongAng Ilbo on Friday. “Because the DP leadership wants to improve the party’s approval ratings through an economic recovery, its position on a pardon for Lee has clearly shifted.”

DP Rep. Yang Hyang-ja, a former Samsung Electronics executive, told the JoongAng Ilbo that pardon would be for the sake of the country, not for Samsung or Lee.

Rep. Ahn Gyu-back said lawmakers from the DP are actually split on the issue. “Some say they want to check public opinion more, while others say Lee should be allowed to manage the business,” he said. “The time has come to address this issue.”

Another idea being floated is that the Moon administration would release Lee on parole, as the Ministry of Justice recently made a rare move to change parole regulations. Justice Minister Park Beom-kye approved a change on May 11 that prisoners who serve about 60 percent of their prison terms will become eligible for parole.

Although the law says that a prisoner is eligible for parole after completing one third of his or her prison term, the ministry has operated on an internal regulation that prisoners should serve more than 80 percent of their terms before parole.

In a press conference on May 11, Justice Minister Park was asked if Lee would be granted a presidential pardon, and he reiterated Moon’s position that public sentiment is a crucial factor.

Asked about the eased parole standard, Park claimed it was not relevant to Lee’s situation. “Lee cannot be an exception from the principle that public sentiment should be considered when releasing a prisoner on parole,” Park said. “And it is also important that the prison warden must file an application to make Lee eligible for parole.”

Next week, the Ministry of Justice will release prisoners on parole to mark Buddha’s Birthday. Over 500 prisoners will be released from 54 prisons nationwide on May 19. Lee is unlikely be included since the eased parole standard will be used starting in July.

“There is no discussion at all about releasing Lee on parole on Buddha’s Birthday,” said a senior source close to the administration. “Moon is a lawyer and there is a little possibility for him to sidestep the principle.”

He said many in the administration think granting a pardon to Lee is better than releasing him on parole because he must resume activities to manage the company. “And the Buddha’s Birthday is too soon, so there is a higher possibility that Lee be pardoned on Liberation Day,” he said.

If Lee is released on parole, he would get out of jail but still be barred from returning to running Samsung. Under the law governing special economic crimes, the Ministry of Justice imposed a five-year employment restriction on Lee in February. 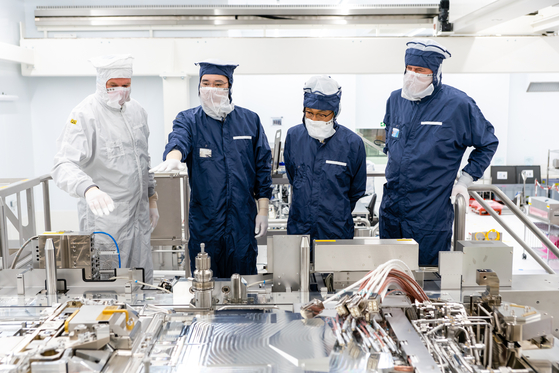 In this file photo, Samsung Electronics Vice Chairman Lee Jae-yong, second from left, looks at the production line of ASML, a world leading photolithography equipment maker, in the Netherlands, during his visit to the company on Oct. 14, 2020. [NEWS1]


Article 14 of the Act on the Aggravated Punishment of Specific Economic Crimes bars those convicted of embezzlement or breach of trust involving more than 500 million won from getting a job at companies closely related to the criminal activities. Under that law, Lee won’t be able to return to management until the second half of 2027 if he is paroled.